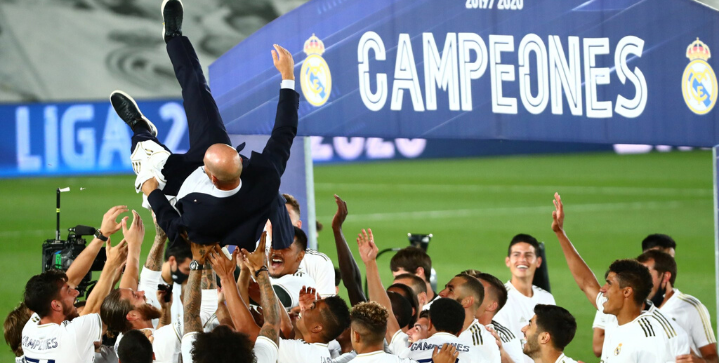 It doesn’t matter whether he’s wearing boots on the field or a tie form the sidelines — all Zinedine Zidane does is win wherever he goes, whatever he does. And that’s none more accurate than his latest endeavor as coach of Real Madrid. Here we recap the eleven best wins from his 2.5-year tenure at Real Madrid.

Zizou lives for the proper send-off. And his last day as coach of Blancos was full of some remarkable memories, like subbing in Gareth Bale after the hour mark in a 1-1 in the Champions League final against Liverpool. Bale, apparently perturbed for being benched, came on a scored a wonder goal in absolute vengeance. And then he scored another twenty minutes later on a goalie mistake. The game ended 3-1 in Madrid’s favor, with Zidane earning his third Champions League trophy after only 878 days as coach. Unheard of.

In just his first season as Real Madrid manager, the magician took Los Blancos to the final of the Champions League and beat La Liga crosstown rivals Atletico Madrid at the San Siro. In what was a dramatic game, the ever crucial Sergio Ramos scored to tie the game in stoppage time. The game then went into extra time and ultimately penalty kids, where Ronaldo sealed the deal in kicking the winner.

How do you stamp your name in Real Madrid folklore? You win the La Liga in your first season, of course. Zidane led Madrid its 33rd title, not to mention tying the record for the second team in La Liga history to net at least a goal a game. So much winning.

In just his second season in charge of Los Blancos, Zidane delivered yet another Champions League title to the awe of football fans around the world. Unlike his first Champions League final, the game against his former club Juventus was lopsided with Real Madrid beating the Italian side 4-1.

In a match between the Champions League winners Real Madrid versus the Europa League winners Sevilla in the UEFA Super Cup, Zidane’s team was down 2-1 until Sergio Ramos scored an equalizer in injury time. Dani Carvajal scored the winner for Los Blancos with a minute left in extra time to seal the win for Real Madrid.

As Champions League winners, Real Madrid met the winner of the European League once again in the UEFA Super Cup 2017 final. Real won 2-1, making Zidane only one of two coaches to have the Super Cup back to back. However, Real would finish as runner-ups the following year; of course, Zidane had already left as coach by then.

After losing the last four out of five Clasico, Real Madrid would win 2-1 at Camp Nou with Zidane at the helm. The victory ended Barcelona’s 39-match unbeaten run and marked a turning point in the season for Madrid, who ended up finishing just a point behind Barcelona in La Liga by year’s end.

While the game ended in defeat for the Real Madrid side in September 2017, it capped a record-setting 73 consecutive games in all Europeans competitions where Los Blancos scored a goal. The steak had started on April 30, 2016, with the one-nil La Liga win against Valencia.

When it’s all said and done, Zidane’s short stint at Real Madrid will always remind us of his three consecutive Champions League victories. From the penalty kicks against Atletico Madrid to the 4-1 whopping of Juventus, to the Gareth Bale bicycle against Liverpool in 2018 final, Zizou is the only manager ever to win three CL titles.