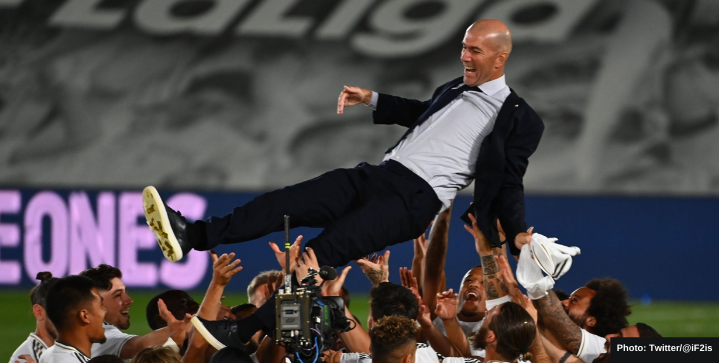 Zinedine Zidane is tipped to become France’s next manager after the team’s disappointing end to the Euros. France lost a penalty shootout to Switzerland in the last 16.

The ex-Real Madrid boss Zinedine Zidane is also enthusiastic about the potential opportunity to coach Les Bleus. “Zinedine Zidane dreams of being the French National Team’s coach. I’m sure he will achieve it,” said Madrid president Florentino Perez.

He’s already decided to avoid coaching at the club level next season, taking a rest while waiting for the French national team job. Zidane left his managerial position at Los Blancos on May 27, marking the end of his second spell with the club.

While his second stint saw far less silverware — he won a remarkable nine titles during his first three seasons, including three consecutive Champions League titles — he still snatched one league title and a Spanish Super Cup over the last two seasons.

Zidane will have to wait for former international and club teammate Didier Deschamps to call it quits, however.

Deschamps has led Les Bleus to one World Cup during his nine-year reign, including an appearance in the Euro 2016 final. He signed a contract extension in 2019 that sees his contract expire at the end of the 2022 World Cup.

Deschamps has no plans of leaving in the near future despite the team’s early Euro 2020 exit. In fact, Deschamps remain interested in an extension. “I may continue after 2022 with the agreement of my president,” he told RTL.

“People have to want to keep me and for that you need results. I will do something else at some point, but I am thriving in this role of manager. I have a contract until December 2022, but today I am not thinking of becoming a club coach. I am very happy, all the conditions are met.”

So it looks like we’ll have to wait until after the World Cup in January 2023 to see if Zidane gets the appointment. As we all know, Zizou has some unfinished business at the international level.