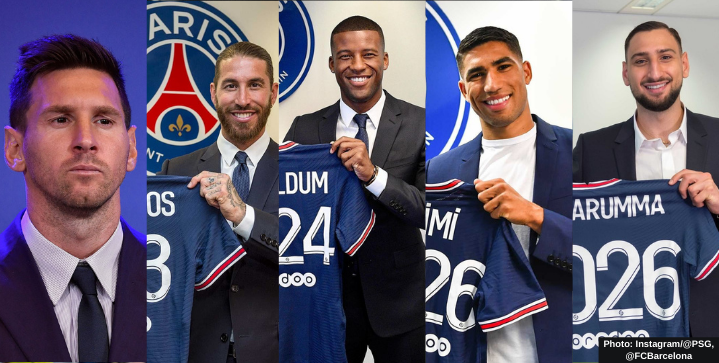 Paris Saint-Germain are on the verge of having the best transfer window ever. Even without the potential signing of Lionel Messi, three out of four of their new superstar signings came on a free.

No one, not even Messi, thought he’d actually leave Barcelona. But here we are, with Messi’s father and agent Jorge inching closer to signing an official contract with the Ligue 1 giants.

The best player in the world is on the brink of joining his boy and former teammate Neymar in Paris.

Update: the deal is done and dusted.

We bet you a week ago you couldn’t imagine arch-rivals Lionel Messi and Sergio Ramos on the same team.

Now, the former captains of Barcelona and Real Madrid will have to set aside their El Clasico differences and make peace in Paris.

Like Messi, everybody expected Ramos to finish his career out with Los Blancos. But his 16 seasons came to an abrupt when Ramos and Madrid failed to come to an agreement on a new contract before it was too late.

PSG just signed one of the best goalkeepers in the world in Gianluigi Donnarumma.

The 22-year-old Italian just had the tournament of his life at the Euros and is now paving his way as the heir to Gianluigi Buffon.

The Dutchman Georginio Wijnaldum ditched an offer from Barcelona to join up with Les Parisiens this summer.

The midfielder played a pivotal role at Liverpool, helping the club win the 2019 Champions League — including THAT semi-final comeback goal against Barcelona — and a 2020 Premier League.

PSG beat out Chelsea for the £58 million signing of Achraf Hakimi from Inter Milan.

The 22-year-old wing-back ultimately preferred a move to Parc des Princes. Hakimi has already scored a stunning goal in his Ligue 1 debut for the club.

PSG is establishing a team of super galácticos of artists and finishers. These five signings put Les Parisiens on the same level as football powerhouse Real Madrid, founders of the “galácticos” policy which saw Luis Figo, Zidane, Ronaldo, and David Beckham join the Bernabeu.

Next up for PSG: Paul Pogba and Ronaldo? In Paris, anything seems possible.