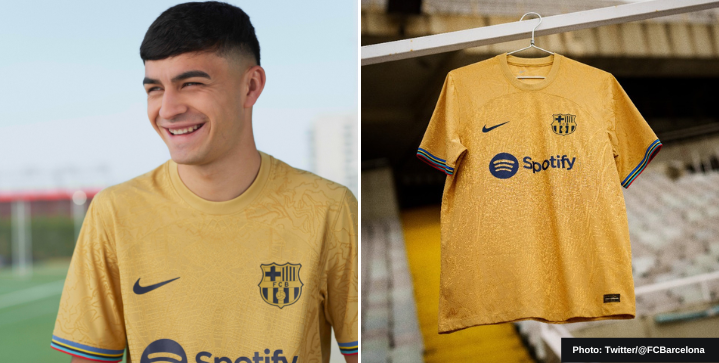 Barcelona has revealed its away kit for next season, inspired by the 1992 Olympics.

The 2022/23 away shirt showcases a primarily gold color to represent medals, with the logos, player’s names and numbers tinted in dark navy.

New club sponsor Spotify, which also rebranded the stadium Spotify Nou Camp, splashes the front of the strip just below the Nike and Catalan giant’s badge, just like the Blaugrana’s home kit.

The five colors of the Olympic rings flank the cuffs, which also appear on the gold socks to complete the look.

The golden shirt also features a pattern of a map of the city, “highlighting the Eixample, Montjuic and Barceloneta in homage to the 1992 Games,” according to official kit launch.

New shirt for a golden season?

The kit’s slogan, “The Flame Lives On,” intends to celebrate the event that defined the city 30 years ago.

The golden kit also pays homage to the world record attendances set by the women’s team this season.

Under the reigns of former gold kit-wearing, Xavi from the 2001-02 & 2003-04 season, the men’s team will hope to join the women’s side in garnering trophies for the club this upcoming season.

With Raphinha to Chelsea imminent, where to next for Christian Pulisic?