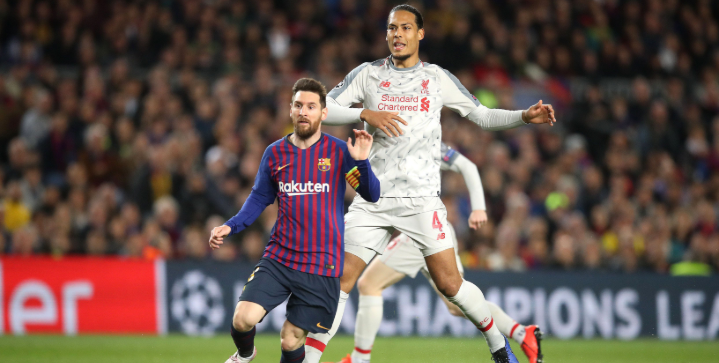 With a brace of goals including a sensational free-kick, it’s fair to say that Lionel Messi got the best of Virgil van Dyk in the first leg of the Champions League semifinals.

But can the big man stall Messi’s magic in leg 2?

The PFA Player of the Year will be desperate to shore up the Reds defense at Anfield and stop Messi from having another stellar performance. Van Dyk must keep the Argentine from penetrating anywhere near the penalty box, including the prevention of free-kicks.

Who wins the battle between Lionel Messi and Virgil Van Dyk In leg 2? Check out our predictions and more in the profile link 🔮🏆 #UCL

Although van Dyk praised Messi’s talents, he’s also declared the heaps of adulation in the media on Messi as “fake news.”

We can also expect the German coach Jurgen Klopp to make tactical changes that make Liverpool play even heavier metal football than usual. However, it also means Liverpool will have to protect against Messi and co on the counter.

Despite a massive mountain to climb, and both Salah and Firmino absent, Liverpool will take faith in past heroics like the amazing second-half comeback at the Miracle of Istanbul to win the UCL title in 2005. The Reds can also take inspiration from AS Roma which came back in the second leg to beat Barcelona in the Champions League quarter-finals last year.

All in all, we can expect a second-half thriller to this Champions League semifinal.