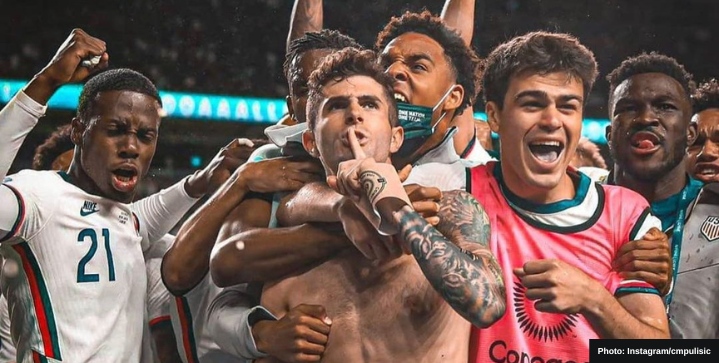 They may not have the goal-scoring exploits of England or Germany nor the dazzling finishing ability of Brazil. Still, the United States has seen some prolific strikers come through the national team, especially in the last decade.

With the Qatar 2022 World Cup soon underway, let’s take a look at the US Men’s top strikers.

His chip in front of the packed Estadio Azteca remains one of the best Dos A Cero highlights.

He also became the first USMNT to play in the semifinals of the UEFA Champions League when he started for PSV Eindhoven vs. AC Milan in 2005.

He scored a winner against Argentina in 1999 at RFK Stadium in an international friendly, a hallmark of USMNT’s success in the 90s. Joe-Max Moore earned 100 caps with the US team, which included 19 goals.

Eddie Johnson is one of the prolific American goalscorers, with 19 goals in 63 appearances for the USMNT. He became the 8th American to score a hat-trick in his second appearance for the Red, White, and Blue in 2004.

Johnson also scored the winner against Mexico in the World Cup qualifiers to send the national team to the Brazil 2014 World Cup.

With 22 strikes in just 54 games for the Stars and Stripes, it still feels like Christian Pulisic is just getting started. The Hershey, Pennsylvania native is the youngest player ever to captain the USMNT and buried that goal against Mexico to secure the National League final.

Is more magic from Pulisic to come at the Qatar World Cup?

Brian McBride scored 30 goals in 95 caps for the US, including three World Cups. He also played an important role in one of the USMNT’s most valiant efforts, going toe to toe with Italy at the 2006 World Cup.

Eric Wynalda scored 31 goals in three World Cups for the United States, including the wicked free kick against Switzerland at the 1994 World Cup. The forward also scored a goal in one of America’s earliest upsets against a footballing powerhouse, defeating Argentina 3-0 in the 3rd group match at the 1995 Copa America.

Goal-getter Jozy Altidore is the third top scorer in USMNT history. One of the best-ever American forwards, Altidore played a vital role in that victory against Spain in the 2009 Confederations Cup semifinals, ending Spain’s 35 games unbeaten streak. Altidore ended his career with the national team with 42 goals.

Undoubtedly one of the best American players of all time, Landon Donovan struck the net 57 times in the Red, White, and Blue. He scored the game-winning goal in the 91st minute against Algeria to advance the US to the Knockout Round of the 2010 World Cup.

He won four Gold Cups in his 157 caps with the national team.

The man, the myth, the legend: Striker Clint Dempsey aka Deuce, scored some of the most memorable goals in US Men’s soccer history, including one of the fastest-ever goals in World Cup history at the 2014 group stage match against Ghana.

Motivated Messi will leave for Qatar World Cup next week