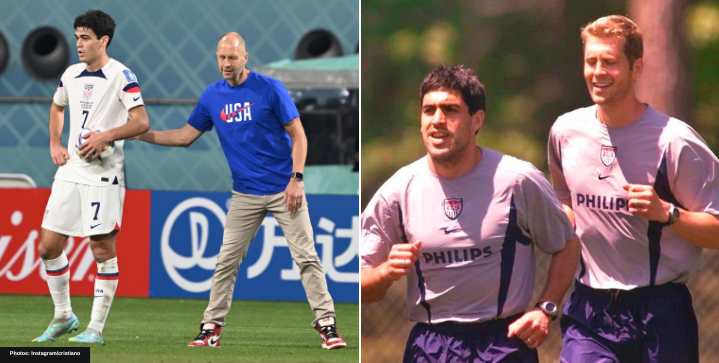 U.S. Soccer officially got its Rebeka Vardy moment in Claudio-gate.

Last night, former USMNT coach Gregg Berhalter revealed in a Tweet that he’d been blackmailed during the World Cup.

Someone with private information communicated to USSF officials about Berhalter’s alleged domestic abuse incident from 31 years ago involving his now-wife, Rosalind.

Berhalter and his wife since pledged to work with the U.S. Soccer’s investigation, inflaming the saga where it is today.

According to The Athletic, the smear campaign operator is Claudio Reyna’s wife, Danielle, and the mother of current U.S. winger Gio Reyna.

Danielle Reyna was Rosalind Berhalter’s roommate at the University of North Carolina, where the two played collegiate soccer in the 1990s.

How the feud started between the Reynas and the Berhalters

Berhalter spoke publicly about the player at an event post-World Cup — about the individual (later revealed to be Gio) who was threatened with an early departure home.

This revelation triggered Danielle to reveal damaging information about Berhalter’s past.

She admittedly sent multiple messages to U.S. soccer executives during the World Cup, capped off with a call to USSF sporting director Ernie Stewart on December 11 after being outraged by Berhalter’s comments.

Is Berhalter still the coach of the USMNT, or has he been fired?

The ongoing rift between the two families poses a significant risk to the future of Berhalter as the USMNT’s head coach. He’s currently out of contract.

On Wednesday, U.S. Soccer announced that Anthony Hudson would take over as interim coach for the team’s January camp and games against Serbia and Colombia.

Hudson served as the USMNT assistant in Qatar and previously coached Bahrain and New Zealand nationally.

It’s also been revealed that Claudio, current G.M. of Austin FC, cut Berhalter’s son from the team before the World Cup. That move is perhaps the catalyst of this entire mess.