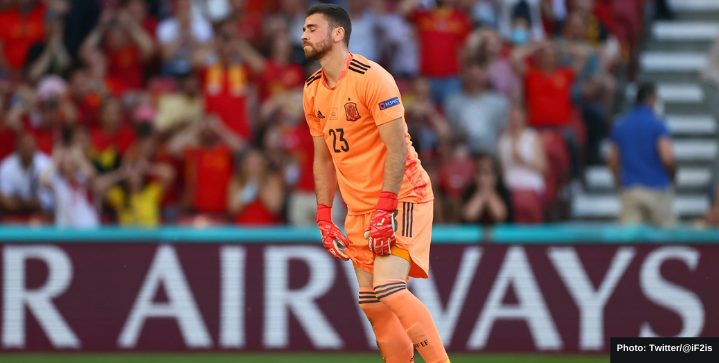 Just give the Own Goals the Golden Boot now because the own goals at this year’s European Championship keep racking up.

Spain’s Unai Simon’s blunder made it nine own goals, as much as the entire previous history of the Euros combined (1960-2016).

Today’s 11th own goal — Simon Kjaer gave England the equalizer in today’s semifinal match — means that Euro 2020 has now witnessed 2 more own goals than in the entire tournament’s history.

Here’s rundown on all the own goals in this year’s Euros.

For the first time in the Euros history, the opening goal was an own goal.

Wojciech Szczesny’s own goal against Slovakia broke two European Championship records. He became the first goalkeeper to ever score an own goal at the Euros. He also scored the earliest own goal in the tournament’s history.

Even more, Szczesny became the second consecutive Juventus player to score an own goal in the tournament.

Ronaldo’s teammates really know how to tap them in to their own net.

“I was told that my son (3 years old) celebrated my goal. I will probably have to teach him what an own goal is,” said Germany’s Mats Hummels after he scored the tournament’s third own goal.

Portugal became the first European nation ever to concede 2 own goals in a single game in a major international tournament. Ruben Dias and Raphaël Guerreiro scored own goals minutes apart.

Even more, 4 out of 5 own goals scored in Euro 2020 were scored by Cristiano Ronaldo’s teammates.

Finland goalkeeper Lukáš Hrádecký scored an own goal in the 75th minute to give Belgium the lead. Butterfingers. He’s officially the second goalkeeper in history to score an own goal at the Euros, following Szczesny.

Slovakia’s Martin Dúbravka scored a bizarre own goal by simply volleying the ball into the back of his own net. And with that, Dubravka became the third goalkeeper to commit an own goal in this tournament. Unreal.

Slovakian defender Juraj Kucka put the nail in the coffin for his team when he netted an own goal in the 71st minute. Spain ran riot with a 5 nil victory.

Spain’s own goal against Croatia was the first they have ever scored at the European Championships. Unai Simon bottled a 49-yard back pass from Pedri. However, Simon later redeemed himself with some crucial saves to help his team advance.

With Switzerland’s latest own goal in today’s quarter-final match — it came from nothing, an errant deflection off Denis Zakaria’s foot — there have now been more own goals at Euro 2020 than at every other Euros combined.

Own Goal also replaces Michel Platini (9 in 1984) as the record scorer for one European Championship with 10 strikes. Ronaldo finished second with 5.

Own Goal, what a player!

Denmark scored the 11th own-goal of the tournament when a Bukayo Saka pass deflected off Simon Kjaer in the 39th minute.

Kjaer is the unsung hero of the tournament for his life-saving actions of teammate Christian Eriksen who suffered a cardiac arrest on the pitch.

Own goals is now six strikes above Cristiano Ronaldo and Patrik Schick (5) in the Golden Boot race.

Will there be an own goal to decide the final? Stay tuned…

The Twitter feud between Coleen Rooney and Rebekah Vardy explained