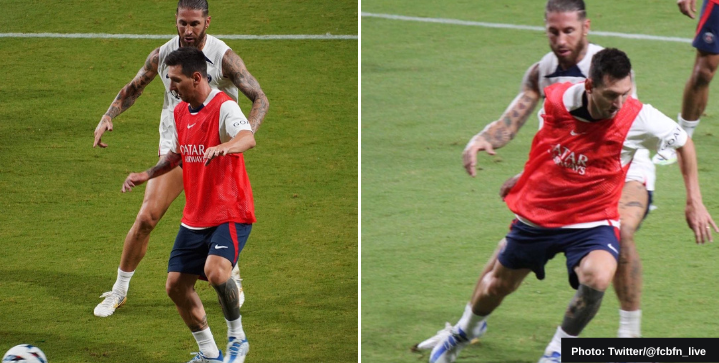 Messi scored the goal but was upset with his old El Clasico foe. Ramos tries to calm down Messi twice after the incident. The two continued to stare each other down. The grudge appears muted for now.

What took them so long?

Barcelona and Real Madrid fans may wonder why it took so long to get heated between the two. The players battled it out 45 times in El Clasico over the 16 years each suited up for their respective clubs.

Both Ramos and Messi became free agents last summer before both made a move to Paris. The two even hugged it out at their first bizarre reunion last August. According to Spanish outlet El Pais, Ramos even told Messi that his family could stay with Ramos if the Argentine didn’t want to lodge in a hotel.

They may be teammates now but the near scuffle at practice proves they’ll never see eye to eye.

After going on a pre-season tour in Japan, PSG head to Israel to kick off against Nantes in the Trophée des Champions this Sunday.