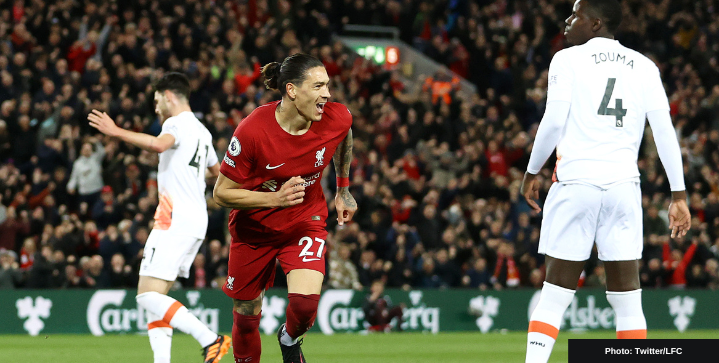 Liverpool’s newest and most expensive transfer ever set a new speed record in the Premier League in last night’s match against West Ham, beating out Kyle Walker’s record set in June 2020.

Kurt Zouma stood no chance in the foot race to get on the other end of Bobby Firmino’s lead pass.

The Uruguayan reached 38km/h, which is faster than the average speed of Usain Bolt (37.6km/h) during his word-record 100m sprint in 2009. For reference, Bolt reached a speed of 45km/h peak during that race.

While Nunez may never beat the Jamaican world record holder in a race, the 23-year-old still showed tremendous in-game pace. He also snatched his first Anfield goal in yesterday’s win.

Nunez is still a work in progress but has shown flashes of brilliance like the Red’s former Uruguayan striker Luis Suarez. “The first of many,” Suarez wrote on Nunez’s celebratory Instagram post.

“He is an exceptional talent – we are really excited about him, he has time to develop, he is young,” said Jurgen Klopp to Amazon after last night’s match.

Nunez has achieved a goal involvement every 86 minutes in the Premier League this season, with three goals in three consecutive starts. He totaled five goals, one assist, and now one EPL record in 12 matches.