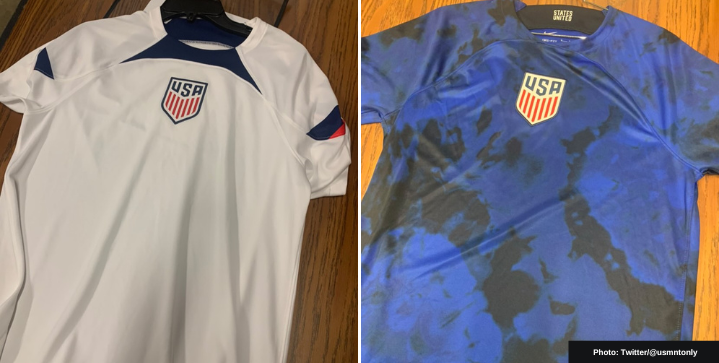 The USA World Cup kits have been leaked, and they’re interesting, to say the least.

The all-white home kit is quite a deviation from the ever-popular “Where’s Waldo” inspired kits of 2012.

The shirt features a swoosh on each sleeve — a regular swoosh on the left and the mirrored (re: reversed) version on the right — just like the ones NFL players wear.

USMNT fans are so upset about the leaked kits they’ve set up an online petition. Even players of the USMNT team appear disappointed by Nike’s lack of creativity. Yunus Musah gave the kits a mixed review. Tim Weah said that he’s “just as angry as y’all,” and Weston McKennie commented, “Tried to tell them.”

The blue away kit isn’t something to write home about either. The blue tie dye graphic gets the same treatment as the home version: the centered crest with swoosh flanking the sleeves.

If these are the final kits, set to be officially released on September 22, many questions will remain. Why the halfway efforts on the kits? What happened to the iconic stripes?

The only saving grace at this point will be the shorts and socks and what the numbers will look like on the front and back.