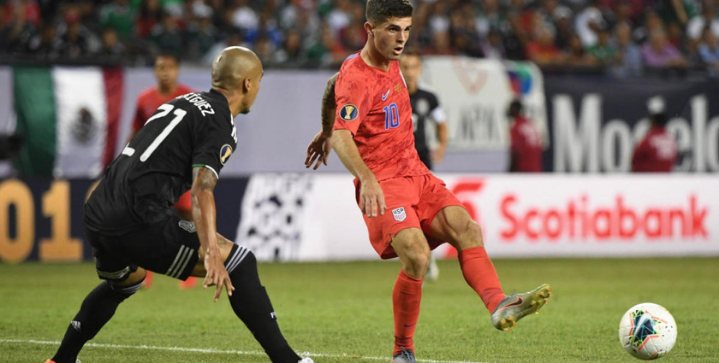 The United States take on Mexico on Friday night in a friendly match at Met Life Stadium in New Jersey.

Both teams last met in the 2019 Gold Cup final which El Tri won 1-0 on a strike from Giovani dos Santos, beautifully set up by Raul Jimenez.

US and Mexico have played each other 70 times since the inaugural 1934 clash in Rome. Mexico holds the lead in the rivalry with 19 wins versus 14 for the Americans. While there may be no trophy at stake in Friday’s match between the two teams, it should still be an intriguing game.

The US roster includes some familiar faces from the Gold Cup including the likes of Weston McKennie and Christian Pulisic — who today, refused to compare himself to his Mexican counterpart Chucky Lozano — but also some new players.

Youngsters Sergiño Dest (Ajax) and midfielder Paxton Pomykal (FC Dallas) are on the US roster but unlikely to get the start.

Meanwhile, 19-year-old Josh Sargeant who Berhalter left off the Gold Cup squad will make a return. Notable absences include Jozy Altidore and Michael Bradly who’ve opted to stay club side with playoff-bound Toronto of the MLS.