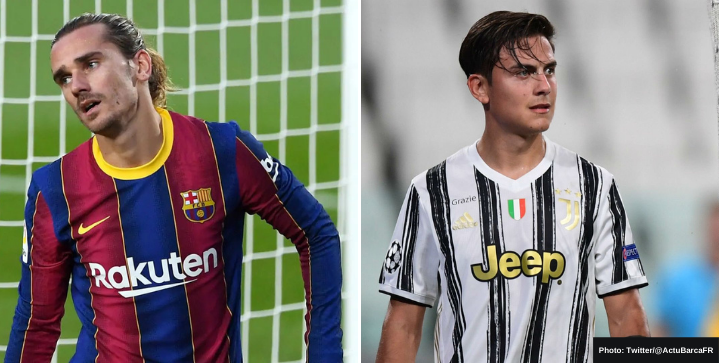 Barcelona are set to offer Antoine Griezmann in exchange for Juventus attacker Paulo Dybala, according to Calciomercato.

Dybala’s contract expires in 2022 with no extension likely given Juve’s financial concerns due to the coronavirus. The Old Lady are also looking to offload Ronaldo and Aaron Ramsey to raise funds for the club.

Meanwhile, Barcelona seem to be making contingency plans should club legend Lionel Messi jump ship for PSG at the end of the season.

Barcelona are the only unbeaten team in Europe’s top five leagues in 2021, with Messi putting up 16 goals and 7 assists this year alone. However, PSG kicked Barca out of the Champions League earlier this month.

Is Griezmann’s time up at Camp Nou?

It appears the the Griezmann experiment at Barcelona is coming to an end.

The French superstar signed to Barcelona for €120 million in the summer of 2019 but hasn’t met expectations. The much maligned attacker does have 13 goals and 11 assists this season.

Griezmann also earns a whopping €24 million a year, which means his wage demands could be on the high side for Juventus.

This isn’t the first time both Barcelona and Juventus have engaged in a swap deal — midfielders Arthur and Miralem Pjanic switched teams at the beginning of this season.