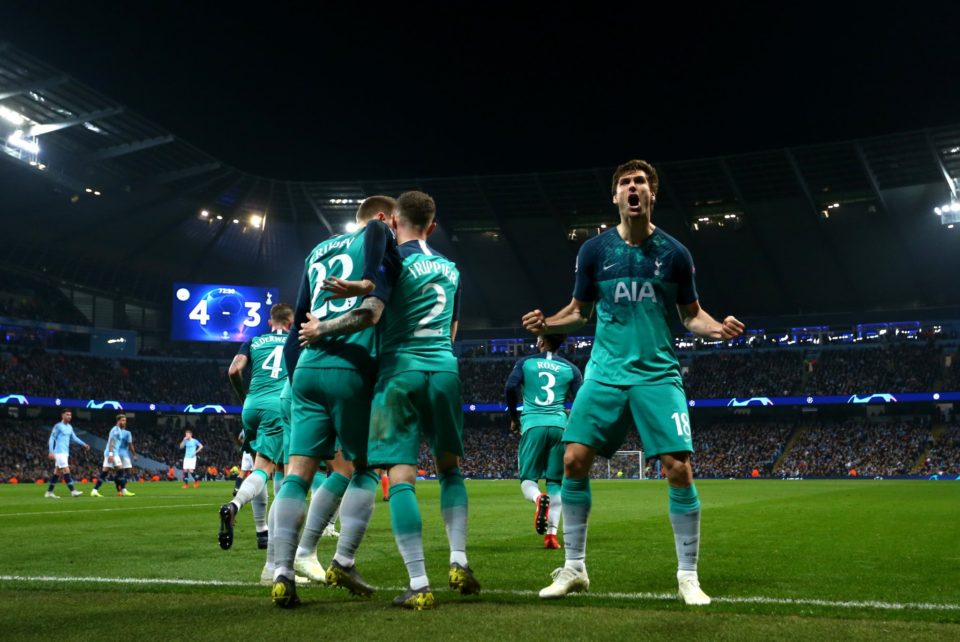 They came, they saw, they survived.

Tottenham Hotspurs are moving on to the Champions League semifinals after a dogged fight against Manchester City.

Even though the Blues got back to normalcy yesterday — scoring four goals after a leg one drought — the Spurs kept coming back.

Like a heavyweight boxing match, the two teams went back and forth on goals in the first twenty minutes of the match. It was 3-2 City by the 21st minute.

Manchester City 4-3 Tottenham.
(Aggregate: 4-4, Tottenham through on away goals)

The second half shared the same excitement. Man City would score only for Tottenham to fire back with a controversial goal. Tottenham’s third goal appeared to hit the arm of goalscorer Fernando Llorente. VAR gave it the nod.

What would have been a game-winning and hat-trick goal from Raheem Sterling in stoppage time was then disallowed as Sergio Aguero was found to be offsides. Said Guardiola, “It’s tough. It’s cruel but we have to accept it. It was a nice game for everyone.”

Despite the enormous £547.3 transformer money spent by Pep Guardiola in the last two transfer windows — Tottenham spent £0 — he has failed to reach the Champions League semifinals in all three seasons with Manchester City. He reached the semifinals seven times straight with Barcelona (3 times) and Bayern Munich (4 times).

The moment Pep found out pic.twitter.com/sBR3lX74Ku

Meanwhile, Mauricio Pochettino’s side achieved the most remarkable feat of his tenure despite an injury to goal-scoring machine Harry Kane. Luckily Heung-Min Son has filled Kane’s boots so far — he scored two last night and the all-important goal in leg one.

It was an epic finish to one of the greatest Champions League games to-date. Now, Tottenham will be hoping for a little magic against a younger, but fearless Ajax side.