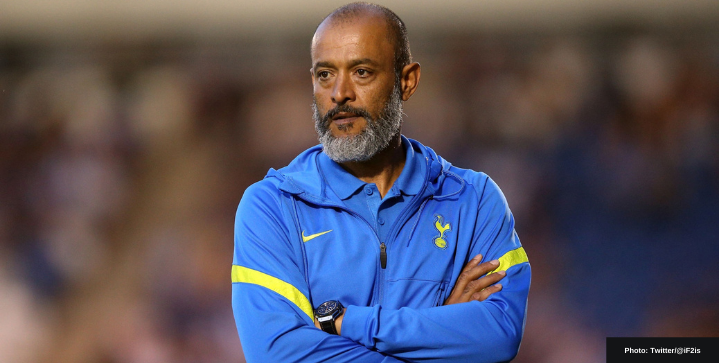 Everything was going so well for Tottenham’s new boss Nuno Espirito Santo at the beginning of the Premier League season. The Spurs started 3-0 and were at the top of the table.

Now, six games in the Spurs sit in the 11th spot, one behind North London rivals Arsenal. The Lily Whites have lost three in a row, making it the Spurs’s worst start in the top-flight since the 2003 season.

To make matters worse, some of Spurs’s first-team squad members are already complaining about Espirito’s football style and “cold” personality.

“We have to react. It’s no good feeling this way like we are feeling,” said Espirito after last weekend’s 3-1 loss to the Gunners.

The Spurs are preparing for Thursday’s Europa Conference League match against NS Mura.

Tottenham are still still searching for the attacking, free-flowing football that got them to the Champions League final under Pochettino two years ago. The ever-dependable Harry Kane remains goal-less through five games.

Spurs goalkeeper Hugo Lloris is pleading with fans for patience with the new coach.

“For any manager, it’s not easy to change everything in one or two months — it’s impossible,” said Lloris last week.

“But he’s bringing his ideas and, step by step, he’s building his relationship with the players.

“Clearly, we are starting [something new]. The idea is that it’s a new process, a new era, with young players. It can’t happen in just two or three months. We need time. We need confidence, we need to stick together — managers, the coaching staff, medical staff, players — and try to go in the same way.

“This is the important thing, to try to make sure everyone is going in the same way. I think we will have a better view [of where we are] in a few months.”

No word has been said yet on how much time Spurs President Daniel Levy will give Nuno, the bald one, to turn things around. After Arsenal began their Premier League campaign 0-3, the Gunners board gave Arsenal boss Mikel Arteta five games to shape up. Arsenal are on a four-game win streak.

Perhaps the situation at Hotspurs still needs time to simmer.