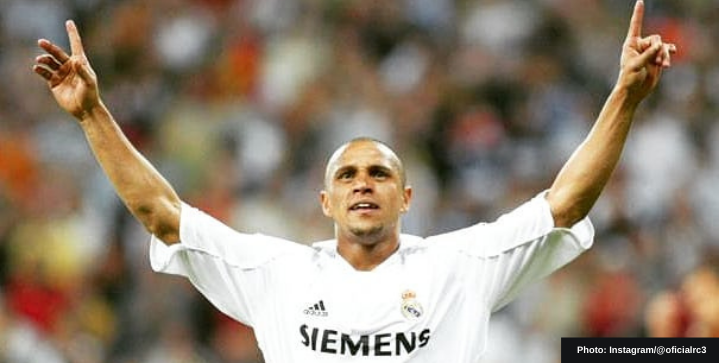 Real Madrid has been a popular destination for some of the most talented Brazilian players, including Ronaldo and Roberto Carlos, and star boys Vinicius Jr. and Rodrygo.

Let’s look at the Brazilian stars who’ve donned the black and white shirt.

Ronaldo shocked the world with his blend of power, speed, and remarkable dribbling technique. With 177 caps and 104 goals for Los Blancos, the striker steamrolled his way to winning La Liga twice, along with a Supercopa de España and Intercontinental Cup.

Part of the Real Madrid Galácticos that ushered in star players from overseas, Roberto Carlos played 527 times for Los Blancos, making his name as one of the best left-back in history. The Brazilian defender also made a name for himself as a free-kick specialist, known for blasting rockets at goal. Carlos finished his Real career winning four domestic league trophies and Champions League three times.

Marcelo is the most capped Brazilian ever to play for Real Madrid, making more than 500 appearances.

The Brazilian signed to Real Madrid in 2013 before he was loaned to FC Porto to develop his game. And the work paid dividends as Zidane molded Casemiro into a dependable starter for the club. The Brazilian played a crucial role in Real Madrid’s three-consecutive Champions League titles from 2015 – 2018. He helped Los Blancos to another UCL title last season, his fifth Champions League trophy overall.

The 30-year-old has now made 336 appearances for Los Blancos across all competitions, scoring 31 goals and notching 28 assists.

Nicknamed ‘The Beast,’ Julio Baptista was a force to be reckoned with on the field during his tenure at Real Madrid. He scored 13 goals in 76 appearances, although he was loaned to Arsenal in his second year.

The industrious Brazilian defensive midfielder played one year with Real Madrid, winning a La Liga in the 2006/07 season before heading back to Serie A.

The Brazilian midfielder Flávio Conceição played four seasons with Los Blancos, earning 45 caps and one goal for the side. He played on loan with Borussia Dortmund in his third season. During his Madrid tenure, he won the Champions League and two Spanish league titles.

The Brazilian left winger scored 16 goals in his 105 appearances for Los Blancos. During his five years, he helped the team win a bag of major trophies including three Champions League, a La Liga, and a Supercopa de España in 2001.

The former Real Madrid left-back Zé Roberto played for Los Blancos in 1997 for only 15 games. But the stay was short and sweet — he helped the side win La Liga and Champions League in 1997, where he scored his only goal for the club.

The Brazilian right-back played one season with Los Blancos, earning 32 caps and scoring four times. Filling in behind Sergio Ramos, he moved on to AS Roma in 2007 to play more regularly.

An 18-year-old Vinicius Jr. signed to Real Madrid in 2018 for €46 million, at the time becoming the second most expensive transfer for a Brazilian after Neymar. While the youngster endured some growing pains in his first two seasons at the club, he’s broken through during the 2021-22 season.

He’s tripled his goals and assists contribution in 50 games this season, totaling 41 (21 goals and 20 assists) versus last year’s 13. His strike partnership with Karim Benzema has been unstoppable — together, the two have a total of 100 G/A this season.

Vini Jr has developed into one of the world’s most elite players in such a short term. Now, the 21-year-world two-time La Liga winner is in line to secure his first Champions League title with the club.

Brazilian starlet Rodrygo joined Real Madrid in 2019 for a €45 million fee. And like Vini Jr, the player has been worth every penny. Last season, he became the second youngest player to score a hat-trick in Champions League history.

The 21-year-old has played a vital role in Los Blancos remarkable run to the Champions League this season, scoring the equalizer in the quarter-finals against Chelsea to go into extra-time. Karim Benzema nailed the winner.

During the Champions League semi-finals against Manchester City, Rodrygo once again came off the bench as a sub to score two goals in two minutes (one in stoppage time), sending the game against Manchester City into extra-time. Benzema once again seal the winner, putting the team into the Champions League finals against Liverpool.

👏 Super subs in the knockouts!