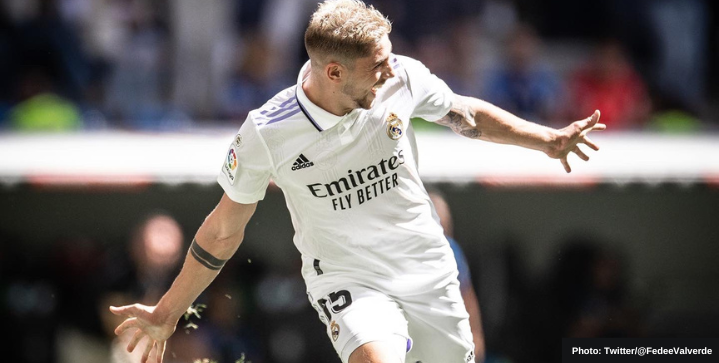 La Liga is one of the biggest leagues in world football. To celebrate Hispanic Heritage month, let’s take a closer look at some of the best Hispanic players playing in Spain right now.

Federico Valverde is one of the best Hispanic players in La Liga. The Uruguayan midfielder laces them up for Real Madrid, where he played a pivotal role in Carlo Ancelotti’s Champions League-winning side last term.

The 24-year-old is also off to a screaming start this year with four goals and two assists in 9 matches while leading the team in total ball carries and chances created. Madrid have won their first six La Liga matches this season for the first time since 1987-88.

So vital to the club’s future, Barcelona signed Uruguayan center-back Ronald Ronald Araujo to a new deal in May 2022, which included a whopping €1bn release clause.

The 24-year-old is in his fourth season for the Catalan giants, looking to add to his 30 La Liga appearances last season.

The midfielder has become one of Diego Simeone’s dependable starters, hoping to add even more goals and assists to his game.

Former MLS standout Valentín Castellanos signed a season-long loan with Girona during the summer of 2022. The Argentine forward was the leading scorer for NYCFC the previous season with 13 goals and two assists. The 23-year-old remains determined to stay in Europe after his loan expires. “I want to stay in Europe. It’s always been my dream and that’s why I work every day. I feel I have what it takes to be in this league,” he said.

Jesús Corona is another Hispanic star to watch out for this La Liga season. The Mexican midfielder is going into his first full season with Sevilla after signing from Porto for around €3 million on a contract last January.