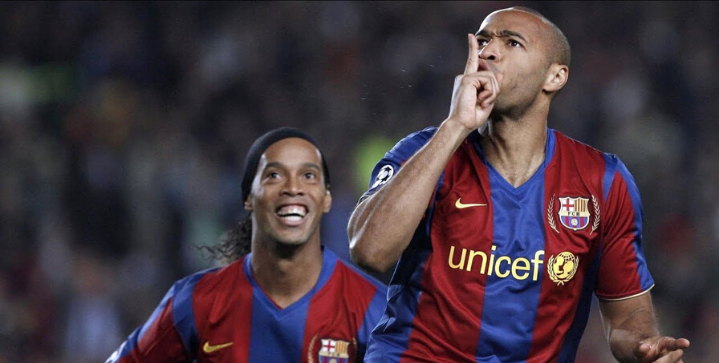 To retain its status as one of the premier clubs in international football, Barcelona signs players from the nation that produces some of the best footballers: France. There’s been a wealth of French talent to join the Catalan side, especially in the last decade.

The young French forward tied compatriot Paul Pogba to become the second-highest signing ever when he transferred to Barcelona on €105 million transfer free in 2017. While injured for most of his inaugural season, he appeared 24 times and scored four goals, achieving a Copa del Rey and La Liga along the way. If healthy and fit, expect Dembele to do big things for the Blaugrana this season.

The French defender is in his third season with the Catalan side, already winning plaudits for his ability to read the game and push the team upfield. With 90 appearances, a La Liga, two Copa del Rey, and a newly penned 5-year contract, Umtiti looks ready to add more silverware.

The French left-back Lucas Digne signed with Barcelona in 2016 from Lille in a fee worth €16.5 million. He played 46 games with the Catalan side, scoring twice. The two-time Spanish Cup winner and one time League Champ now plays for Everton.

The left-back played three years with Barcelona, helping the team secure a Champions League, a league trophy, and three Copa del Rey before moving on to Sporting CP.

A tactical defender with strong physical play and good pace, Eric Abidal helped guide Barcelona to two Champions Leagues, four league titles, and two Spanish Cups. In 2011, the team united around Abidal who faced health issues related to a tumor in his liver. After a successful transplant, he returned to the squad in January 2013 before moving back to Monaco.

The French striker earned 121 caps with the Catalan side, scoring 50 goals and helping the team win a Champions League, two Spanish league titles, and a Copy del Rey. The combination of Henry’s pace, dribbling and finishing skills made him a defensive nightmare at both international and club level.

The French forward Antoine Griezmann made a whopping €120 million move from Atletico Madrid to sign for Barcelona in the summer of 2019. But he didn’t quite live up to the hype despite scoring 35 goals and notching 16 assists and a trophy in 102 matches for the Catalan giants. He returned to Atletico Madrid on a one-year loan to begin the 2021/22 La Liga season.

The attacking midfielder earned 85 caps with Barcelona, scoring 19 goals. He helped the side win the Treble in the 2004-05 season, collecting the Champions League, La Liga, and the Spanish Super Cup.

Recognized for his speed on and off the ball, Lilian Thuram played the last two seasons of his career with Barcelona, earning 41 caps.

Emmanuel Petit joined Barcelona for a year before returning to the Premier League. Hampered by injuries, the midfielder played 38 games and scored once.

Selected by then manager Johan Cruyff who was sacked the same day he signed for Barcelona, Laurent Blanc found it a difficult year to impress new management. He made 28 appearances with the club, scoring one goal and winning a league title and Copy Del Rey before heading back to the French league.