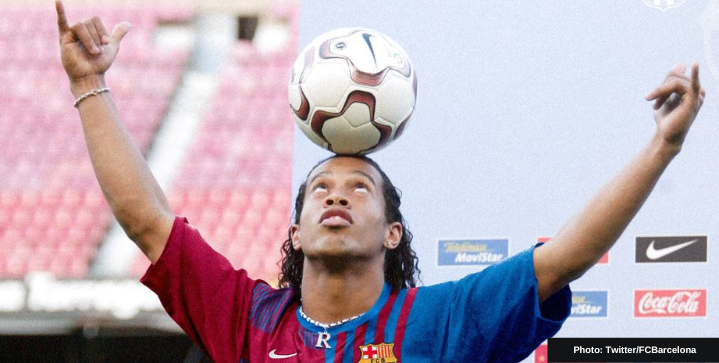 From Ronaldinho to the most recent addition Raphinha, Barcelona has a proud history of signing some of the best in Brazilian talent. In fact, the Catalan giants have signed 34 Brazilians to date.

Let’s take a look at the top eleven players to wear the Blaugrana kit.

Often considered one of the best to ever play the game, the gifted Brazilian dribbler known quite simply as Ronaldinho scored 70 goals for the Catalan side over five seasons. He remains only player other than Maradona to have received a round of applause from Real Madrid at the Santiago Bernabéu. The smiling superstar won both a Ballon d’Or and FIFA World Player of the year after winning Champions League and second La Liga title 2005.

The long-legged forward joined Barcelona in 1997 where he scored 109 goals over five seasons, none more magnificent than the bicycle kick that completed his hat-trick against Valencia and got Barcelona into Champions League. Winner of back to back La Liga titles in 98 and 99, where he was the league’s top scorer, Rivaldo won FIFA Player of the year and the Ballon d’Or in 1999.

The Brazilian right-back Dani Alves won 24 different trophies in his eight years at Nou Camp, including the treble in his first season. Recognized for his technical skills and pace, he’d add to his trophy collection a total of three Champions League titles, six League titles, four Spanish Cups, five Spanish Super Cups, and four UEFA Supercups.His 42 trophies are the most in football history.

Alves became head coach Xavi’s first signing in November, 2021 although he didn’t start playing until he became available in 2022. He played for the Blaugrana for the remainder of the season, making 408 appearances for the club in total, second behind Lionel Messi.

The Brazilian striker moved to Camp Nou from Liverpool in the January 2018 transfer window for a £105m transfer. The attacking midfielder prized for his technique and pace has already scored 14 goals in 35 appearances with the club.

As part of the core offensive unit consisting of Messi and Luis Suarez, Neymar helped Barcelona win the treble of La Liga, Copa del Rey, and the Champions League during the 2014-15 season. He scored 105 goals in 186 appearances before heading to Paris St. Germain on $263 million record transfer fee.

With 125 club appearances, the left back played five years with Barcelona where he won a swathe of trophies including three La Liga and two Champions League titles in 2006 and 2009.

A vital component of Frank Rijkaard’s team in the 2005-06 season, Edmilson won the double of Champions League and La Liga — he won the latter in his first years as well. The center back spent four seasons with Barcelona where made appeared in 74 matches.

In his two seasons with Barcelona, striker Sonny Anderson sat behind Patrick Kluivert and Luis Enrique in the Blaugrana pecking order but still managed to score 16 goals and win two La Liga along with a Copa del Rey.

As a replacement for his Brazilian teammate Sylvinho, Maxwell joined the Catalan giants in 2009 and played an important role in filling in for the injured Éric Abidal en route to winning La Liga. He played 57 games with the side before moving on to Paris Saint Germain.

Brazilian winger Raphinha is the latest Brazilian to join Barcelona. At a deal worth up to £55m, he’s the seventh-most expensive signing in Barcelona’s history.

“Playing for Barcelona is my dream, my family’s dream, and my friends’ dream,” said the 25-year-old upon signing. “I hope to do atleast half of what Ronaldinho and Neymar did here.”

The player contributed 29 goals and assists in just 67 appearances for Leeds United. Let’s see if he can maintain that sensational form for the Blaugrana.