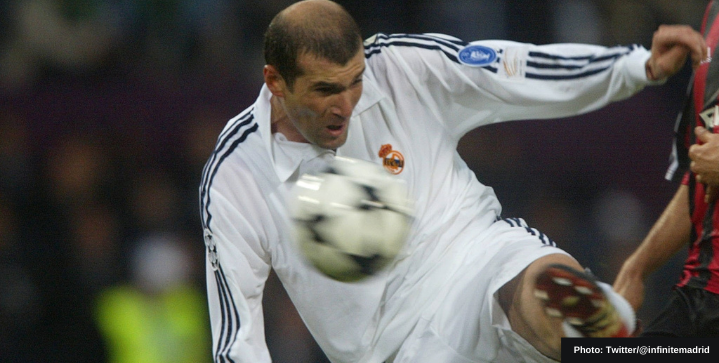 One of the most successful clubs in world football, Real Madrid are also known for their iconic kits.

Here we break down the best-looking kits from the 120-year-old storied club.

The 1994/95 home kit was one of the more unique-looking Real Madrid kits — it featured the ever-slick collar combined with purple paw taping on the sleeves.

Who can forget Danish sensation Michael Laudrup dazzling in this vintage shirt as Madrid won the 94/95 league title. The likes of Clarence Seedorf, Raul, and Fernando Hierro didn’t look so bad in this kitsch kit either.

Real Madrid’s 1982 home kit was as simple and as classic as it gets.

Dawned with the Adidas Trefoil logo and Real Madrid crest on the upper body, it was also the first club shirt to be sponsored, in this case by Italian home appliance company Zanussi.

Real Madrid scored the most goals (121) in a league season in this iconic white and gold strip. Madrid’s frontman Cristiano Ronaldo notched 46 of those in La Liga, including the famous “calma calma” celebration at Camp Nou in front of 100,000 Barcelona fans.

This was the season the Mourinho-led squad finally broke Barcelona’s La Liga’s dominance.

Yes, that kit, the one Zinedine Zidane scored an incredible volley to help Real Madrid lift their ninth European Cup.

Interestingly, the home shirt was also sponsorless, the only home jersey since 1982 to maintain a clean white front. Siemens featured on all the other alternative kits that season.

Simplicity at its finest. Real Madrid’s 1959/1960 kit is a nod to the club’s trophy-filled 50s era when it won five European Cups in a row.

The stripe-less kits is all about the all-white colorway and iconic crest. Some of the best players in the club’s history sported the shirt, including Alfredo Di Stefano , Francisco Gento, and Ferenc Puskas.

The kit is a timeless fashion piece to match the world-famous Santiago Bernabéu the team still plays in.