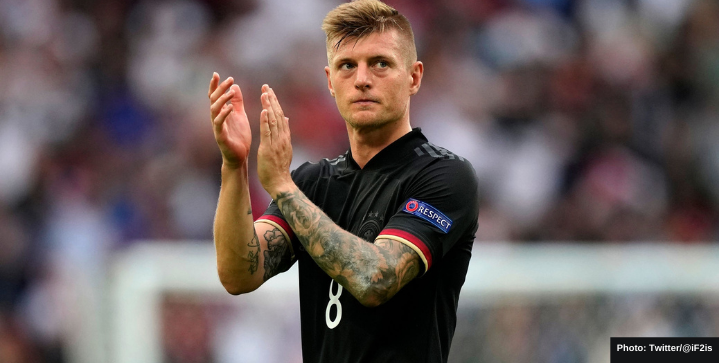 World champion Toni Kroos has announced his retirement from international football. “It has been a huge honor to have been able to wear this shirt for such a long time. I always did it with pride and passion,” said the 31-year-old midfielder.

“Thank you to all the fans who have carried and supported me with their applause and cheers. And thanks to all the critics for their extra motivation.”

Only six players have made more appearances for Germany.

Kroos retires from Die Mannschaft with 106 caps, scoring 17 goals, providing 16 assists, and winning the 2014 World Cup. Plus, nobody will ever forget that 95-minute free-kick winner against Sweden at the 2018 World Cup that kept Germany’s Round of 16 hopes alive.

Kroos recorded the most touches, passes, tackles, and fouls won in this year’s Euro campaign. But now the player wants to turn his total attention on Real Madrid. “I want to fully focus on my goals with Real Madrid. I want to thank Löw and I wish Hansi the best of luck.”

Kroos has been a stalwart in the midfield for Real Madrid since signing for the club in 2014. He has won many trophies with Madrid, including three Champions League titles and two La Liga.