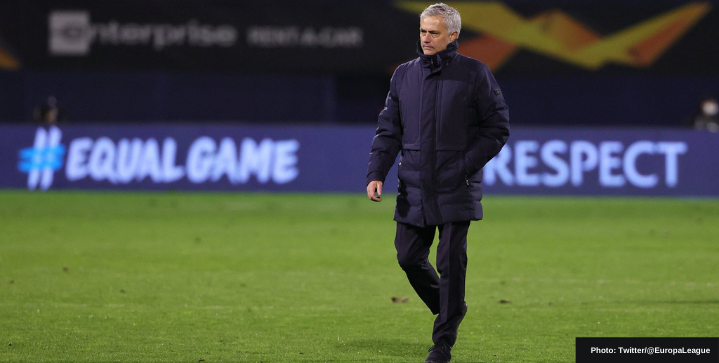 Jose Mourinho is on the verge of being sacked after last night’s capitulation to Dinamo Zagreb in the Europa League.

Mislav Orsic’s hat-trick brought Zagreb back to beat Spurs 3-2 on aggregate after the Blues surrendered a 2-0 first-leg lead.

The Spurs’ collapse in Croatia is their second embarrassment in a week. Tottenham lost 2-1 to Arsenal after building a one-nil lead in the North London derby.

Spurs sacked Mauricio Pochettino after five and a half years in charge at the end of 2019.

Hiring Mourinho appeared to pay immediate dividends — Spurs climbed up the table to finish 6th at the end of the 2019/20 season. Spurs sat in the top spot of the Premier League table for a brief period during this term.

Fast-forward to today: Mourinho’s Spurs got knocked out by Dinamo Zagreb in the Europa League, sent down and out by Everton in the FA Cup, and sit 8th in the Premier League table.

Winning the Carabao Cup against Manchester City is the club’s only chance at a trophy. But winning the Cup is no guarantee that Spurs chairman Daniel Levy remains confident in retaining the Special One’s services.

Mourinho’s contract expires at the end of the 2023 season with the Portuguese man due a major payout if he gets fired early.

The 33-year-old coaching prodigy — reminiscent of an up-and-coming genius Mourinho — could be the man that gets Spurs back into European football, a feat vital to the club’s financial security.

Nagelsmann is known for his rapid, attacking football much like how Spurs played under Pochettino.

The German is still tipped to become future Bayern or Barcelona head coach but is also keen on finding a long-term project in the Premier League.

Tottenham could be the ideal place for Nagelsmann to further solidify his ascendancy as one of the world’s best coaches.

Transfer Rumors: Messi plans a reunion with Fabregas in MLS