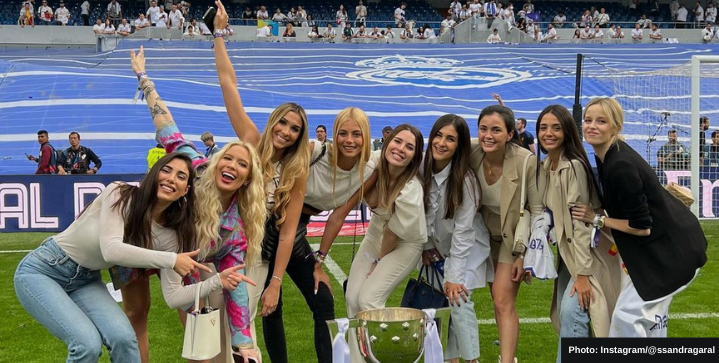 Carlo Ancelotti’s team has been flying this year. Los Blancos won La Liga and are set to meet Liverpool once again in the Champions League final. But who are the partners and football souls supporting and empowering the players on the pitch and back home?

Here are some of the hottest WAGS (wives and girlfriends) of players on one of the world’s biggest clubs, consisting of social media influencers, models, and tv presenters.

Karim Benzema has become Real Madrid’s leading player ever since the departure of Ronaldo. The Frenchman, tipped for this year’s Ballon d’Or for his remarkable goalscoring spree — currently, 44 goals in 44 matches — is also spearheading Los Blancos’ remarkable return to the Champions League final, where they will once again meet Liverpool.

His former wife, French-born Cora Gauthier, is a social media influencer and model who’s worked for brands like Zara and Dior. She and Benzema met in Dubai in 2015 before getting married a year later. The couple has a son Ibrahim, born in 2017.

Left-back Marcelo is the club’s most decorated player of all time, with 24 trophies in 15 seasons. His wife, Clarice Alves, has been with him since he debuted for Madrid in 2007. She is a Brazilian actress and social media influencer with 626k Instagram followers to boot.

The two married in 2008 and have given birth to two children, Enzo (who currently plays for the Real Madrid youth team) and Liam.

“Wales, golf, Madrid. In that order.” Gareth Bale is undoubtedly not a fan favorite at the Santiago Bernabeu, but his contributions are undeniable. He’s played a vital role in the club’s Champions League predominance, an unprecedented run that included four Champions League titles during the 2014-18 period. He scored one of the most memorable goals in the tournament’s history in the 2018 Champions League final, netting off an incredible bicycle kick.

His wife, the Welsh-born Emma Rhys-Jones, was also his childhood sweetheart. The couple, who married in a sensational Balearic wedding in 2017, are parents of three children: Alba, Nava, and Alex.

The ever-versatile central midfielder Federico Valverde took less than two seasons to break through at Real Madrid. The Uruguayan is now a staple at the club, with a long-term contract signed until 2027. He’s on the brink of winning his first Champions League title at 23-years-old.

Valverde has a relationship with Argentinian sports journalist and presenter Mina Bonino. She is a well-known presenter for the hit television show “Instrusos.” The couple has one son together.

Marco Asensio is a two-time Champions League and three-time La Liga winner. The 26-year-old winger has significantly contributed to the team’s success during his seven-season spell.

His partner is Madrid-born model Sandra Garal who has developed a significant following on Instagram with 280k followers. She’s also an architecture and design student at the Polytechnic University of Madrid.

His wife, Daphne Canizares, is a model and influencer in the fashion world. She also founded the company ‘Blue Weddings’, which operates weddings and other social events.

The 24-year-old central defender Eder Militao has become a suitable replacement for the outgoing Raphael Varane and Sergio Ramos.

Karoline Lima is Militao’s beautiful girlfriend who hosts a massive 2 million Instagram followers. The Brazilian was already a well-known public figure before she met Militao and increased her fanbase. The two are expecting their first child later this year.

After his move from Bayern Munich, David Alaba, the newest addition to the Real Madrid side has quickly formed a central defensive pairing, alongside Militao.

Alaba’s partner, Shalimar Heppner, is a 26-year-old German model who is also half-Asian. She’s the daughter of the well-known German chef Frank Heppner and also works as a campaign manager for a German influencer marketing company. The couple share one child.

Rodrygo is the latest Brazilian starlet to shine at Madrid — the 21-year-old scored the all-important two goals in two minutes in stoppage time of the Champions League semi-finals against Manchester City. He looks to get his first Champions League trophy later this month against Liverpool.

His 23-year-old Brazilian girlfriend, Luana Atik, is a social media influencer who gets along with the other WAGS of the team.

The 21-year-old Brazilian is coming off his first career Real Madrid hat-trick against Levante after forming a deadly partnership with goal-machine Karim Benzema this term.

30-year-old Thibaut Courtois has transformed into one of the best goalies in world football. He’s been a wall in the back of the net for Madrid this season, keeping four clean sheets in eight Champions League appearances. The two-time Premier League, three-time La Liga winner is now aiming for his first Champions League title.

His girlfriend is Israeli model Mishel Gerzig is also a social media star. Courtois has two children in a previous relationship.

What else is there to say about the Croatian magician Luka Modric, who, at 36 years old, continues to excel in La Liga and the Champions League.

Modric’s wife, Vanja Bosnic, also happens to be the player’s agent as she helped secure the move from Tottenham to Real Madrid in 2012. The couple has three kids together.

One of the world’s best midfielders, 32-year German soccer star Toni Kroos is hunting for his fourth Champions League trophy.

Unlike most WAGS, Kroos’s wife Jessica Farber prefers to keep a low profile but attends galas with her husband. The couple has two kids.