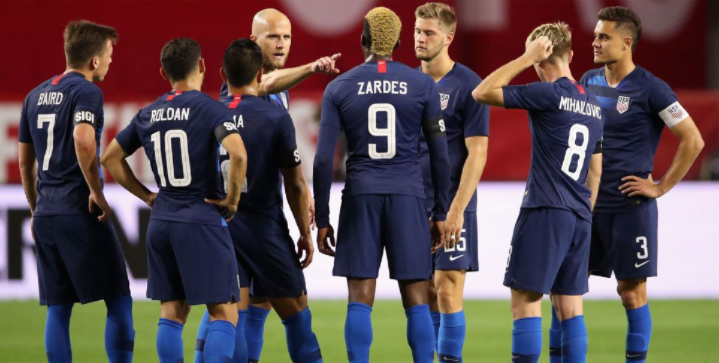 With back-to-back defeats to Jamaica and Venezuela, the USMNT will be looking to get back on track under new coach Gregg Berhalter when it meets Guyana in its first match of the 2019 Gold Cup on Tuesday night.

There’s still a lot of uncertainty how the US coach plans to line up in the tournament given the absence of 20-year-old Tyler Adams. The RB Leipzig right back is sitting out due to a groin injury with San Jose Earthquakes Nick Lima expected to fill in.

“It’s one of those things that you can’t control, we bring Reggie Cannon into camp, and we move on,” said Berhalter. “Adams is a strong player, we’d love to have him, but we don’t.”

Starters DeAndre Yedlin and John Brooks are also sitting out the Gold Cup with injuries.

Despite missing key players, Berhalter remains sanguine about the team’s chances. “We also have expectations on ourselves to get results,” he said. “So when we’re entering this Gold Cup, we want to win this Gold Cup. That’s what we want to do and that’s what we expect to do.”

Who’s going to step up for the USMNT?

“It’s nice to have guys like Michael Bradley and Jozy Altidore here again…it’s going to help the team going forward, especially in this tournament setting,” said US star Christian Pulisic.

While Bradley and Altidore provide some veteran leadership, the team still needs the younger players like Pulisic to step up. Pulisic became the most expensive US soccer player in history with a $73 million transfer to Chelsea agreed to earlier this year.

There is a ton of pressure riding on the 20-year-old attacking midfielder. But he’s so far proven himself on the international pitch — he’s scored 10 goals in 25 games. However, Pulisic recently joined the USMNT in training and will need time to adapt to Berhalter’s system.

With all the success the US Women’s team are having in the World Cup, the pressure is on the men’s squad to step up and rebuild their confidence en route to World Cup 2022.