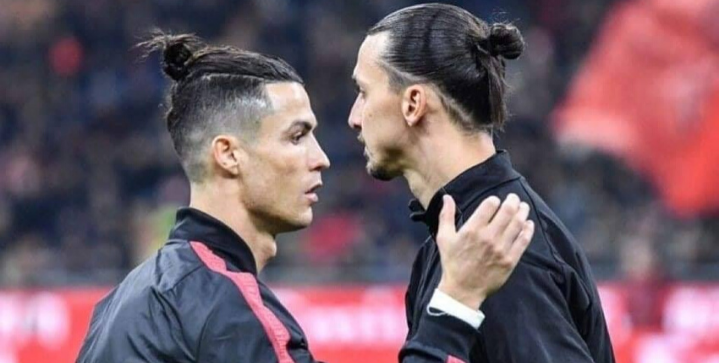 The man bun has made a resurgence in the game of football with one of the game’s greatest-ever players, Cristiano Ronaldo, the latest player to sport the look.

Love it or hate it, let’s take a look at some of the “best-looking” top-knot man buns sweeping the football world.

The Welsh international and Real Madrid legend is not shy about flashing the man bun, scoring one of the Champions League’s finest goals with the hairdo in the tournament’s 2018 final against Liverpool.

Even more revealing, though, was Bale’s decision to unfurl his man bun during a 2019 match to prove to all the haters once and for all that he was not hiding a bald spot.

He’s carried the torch in the top-knot movement since his days at Paris Saint-Germain.

The man bun is nothing new for Zlatan Ibrahimovic. The goal-scoring machine took has taken his look to Manchester United, Los Angeles, and back to the San Siro again.

Zlatan’s statue in Sweden even has the iconic man bun. Thankfully, the thieves who chafed the nose decided to keep the top-knot intact.

Europe’s top player at the ripe young age of 35-years-old, Cristiano Ronaldo scored in 10 consecutive Serie A matches — including a hat-trick to start 2020 — sporting his man bun.

While even Ronaldo’s biggest fans may disapprove of the little bun, his latest scoring tear may convince them otherwise.

From the man who put the man bun on the map, David Beckham is possibly the only footballer who’s successfully pulled off the hairstyle.

Whether it was in Madrid or Los Angeles, Becks knew how to rock the man bun.

Some say David de Sea hasn’t been the same since he ditched his hairdo for the man bun.

But to think the man bun has stripped the Spaniard of his powers is nonsense. De Gears hipster man bun and beard combination is one we can appreciate.

Why, yes, the best defender in the world wears a man bun.

To think the 2019 Champions League winner will cut off the small bun just to appease the haters is nonsense.

One of the more recent additions to join the man bun club is Arsenal fashion style-don Hector Bellerin.

The Spaniard is known to sport the latest looks and with the mustache, seems to have pulled off the bun with aplomb.

While sporting the shaved head in his Arsenal days, Everton’s Theo Walcott decided to mix things up at Everton.

The English striker put his own spin on the man bun, adding corn rows to the mix.

The man bun is nothing new to Andy Carroll – the English striker has owned the look during his time at West Ham before taking it to Newcastle.

It is worth nothing though that he signed his biggest deal with Liverpool when he wore his hair down.

An effortless style of play needs a good mop of hair to go with it and 27-year-old Juventus midfielder Adrien Rabiot offers just that. Four years ago, the man bun extraordinaire refused to be named on the standby list for Russia. Today, he’s scored and assisted in his World Cub debut against Australia.

Save the best for last. Liverpool striker Roberto “Bobby” Firmino wore the man bun for brief periods during the 2016-17 and 2017-18 seasons.

Luckily for him, his fortune and Liverpool’s started to turn as soon as he cut it off. We don’t think he’ll be reverting back to the look any time soon.