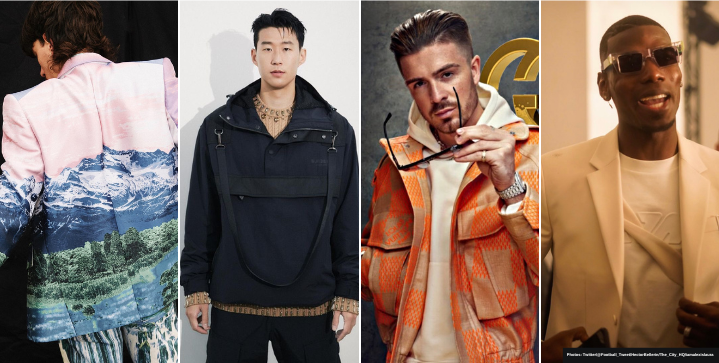 The relationship between fashion and football continues to bloom. From Gucci Grealish to Burberry-sponsored Son Heung-Min, let’s take a look at the Premier League’s most stylish footballers right now.

The mustache man, currently on loan to Copa del Rey winners Real Betis, is a diehard fashion aficionado. The Spaniard attends Milan shows, gets featured in shows, walking Louis Vuitton’s Gardener-Friendly Spring/Summer 2020 Collection, and is a drip king. He sees fashion as an extension of art; he’s also never afraid to speak up about important global issues.

Progressive on and off the pitch, Manchester City midfield maestro Iİlkay Gündoğan knows how to sport perfectly trimmed facial hair. When the club’s not making him wear those horrendous Dsquared2 denim outfits en route to away games, the German looks snazzy in a turtle neck.

Not just talented on the pitch, the Frenchman Paul Pogba knows how to suit up. He probably should’ve won the 2016 Ballon d’Or for his outfit alone.

“I’ve always loved fashion. My interest started young and came from my mother – she always used to ask me which dress she should wear, and I’d pick. On the pitch, fashion shows your personality – it says, this is me, Paul Pogba,” said the 29-year-old midfielder as part of an Adidas x Gucci campaign last year.

PS: Here’s a list of our favorite Pogba haircuts to date.

The 24-year-old Leicester midfielder is known for his hit-or-miss fashion sense. He grabbed the footballing world’s attention with his shiny Louis Vuitton £6500 backpack in 2019. He’s since redeemed himself by launching fashion lines in collaboration with BoohooMan and personally branded pearl necklaces.

The three-time Premier League Golden Boot winner Mo Salah is a force to be reckoned with on and off the pitch. He appeared on last February’s cover of Britain’s GQ Magazine. He was also GQ’s Man of the Year in 2019, starring alongside model Alessandra Ambrosio in the magazine’s special summer edition.

The Egyptian playmaker is suited for any fashion show.

Jack Grealish inked a £12m a year deal with Italian brand Gucci back in April, making him the first footballer to become an ambassador for the high-end luxury fashion house. Man City teammate Kyle Walker dubbed the Englishman “Gucci Grealish.”

Like Beckham before him, the Premier League’s record signing is doing his part to revolutionize the relationship between football and fashion worlds.

The French footballer Allan Saint-Maximin plays high-fashion football with his Gucci headband. How Grealish got the Gucci ambassador role over Allan is anyone’s guess.

But it got the 25-year-old Newcastle winger a deal with fashion brand Mantikor, who teamed up with Allan Saint-Maximin for a collaborative headband.

The Everton striker Dominic Calvert-Lewin also shares a high-fashion sense. The 25-year-old, who calls his father his style muse, can also be seen attending fashion shows.

“I just try and stay true to myself and wear what I want to wear depending on the mood I’m in,” Calvert-Lewin told GQ. He wore double-denim and posed with a £3,900 Chanel bag on the GQ cover back in April.

“I’m happy that some people perceive me as some sort of fashion inspiration, but in all honesty I stay in my own world and do what I feel like doing.”

It wouldn’t be a proper list without including the fashion icon himself, Cristiano Ronaldo. The Manchester United legend is again back in the Premier League, sporting stylish haircuts and donning the best Armani suits.

The South Korean forward should be able to give Gucci Grealish plenty of luxury fashion competition.

“Being an athlete from the Premier League, it’s my honor to partner with a brand so rich in British heritage,” Son said.

“I love Burberry’s strive for imagination and innovation which has been deeply inherited in its history, which are values that I champion.”