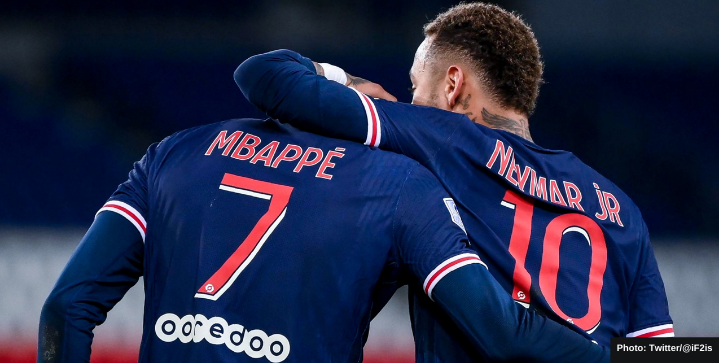 From Paul Pogba to Kylian Mbappe to Neymar, transfer fees seem to be getting higher and higher to the point of inflation. After all, Lionel Messi’s buyout clause was a whopping £626 million before his contract expired this year! Here is a list of some of the most insane transfers to date.

The €222 million ($263 million) transfer fee paid for Brazilian starlet Neymar in 2017 from Barcelona to Paris Saint-German more than doubled the previous record fee set by Paul Pogba the year before. Needless to say, there’s mounting pressure on Neymar to deliver trophies for the club, including getting the team to its first Champions League final.

Neymar re-signed a four-year contract extension with PSG in May 2021.

Originally joining PSG on loan from Monaco for the 2017 – 2018 season, the teenage sensation permanently signed for the PSG for a whopping €180 million ($214 million). Coming off the heels of a stunning World Cup performance for the young talisman, the future looks bright.

The Brazilian striker moved to Camp Nou in the January 2018 transfer window for a £105m transfer. After signing for his new club, Barcelona listed his buyout clause as £355m. The player receives an addition £4.4m if he wins the Champions League during his tenure.

The 21-year old French forward signed with Barcelona from Dortmund in the beginning of the 2017 season for a transfer fee of £96.8m. It is an astonishing snag for Dortmund who paid a mere €15 million transfer fee for Dembele the year before.

The versatile French midfielder Paul Pogba signed on to Manchester United from Juventus for an £89.3m ($116m) transfer fee in 2016, setting a record for the most expensive transfer fee of all-time until Neymar broke it a year later.

He’s now on the verge of exiting the club for PSG.

Jack Grealish became the most expensive Premier League footballer when he signed for Manchester City from Aston Villa for £100m in the summer of 2021. By doing so, the Englishman broke the previous record set by Paul Pogba, who signed for Manchester United from Juventus in 2016 for £89.3m.

“I’ve obviously been an Aston Villa fan my whole life,” said Grealish. “But you know, when I spoke to the manager here and you see what type of players you’ve got here in the end you know it was something that I couldn’t say no to.”

The five-time Ballon d’Or winner signed onto Juventus from Real Madrid for an £88m transfer fee in 2018, a remarkable fee considering the forward is in the latter stages of his career.

Gareth’s Bale move from Tottenham to Real Madrid included a transfer fee of £85.3m, almost double Zidane’s £45.6 million fees in 2001, and Ronaldo’s 2001 transfer fee to Los Blancos from Manchester United for €80 million in 2009.

In his second appearance on the list of highest transfers fees of all-time, Ronaldo broke the record in 2009 when he transferred from Manchester United to the Bernabeu for €80 million in 2009, breaking the previous record set by Zidane for £45.6 million in 2001.

The Argentinian striker made his way to Serie A heavyweights Juventus for a fee of €90 million in 2016, becoming the world’s third most expensive player at the time. Let’s just Napoli fans are still reeling about Higuain’s move to a Serie A competitor.

English center-back Harry Maguire became the most expensive defender in 2019 when he signed an £85 million ($100 million) deal that moved him from Leicester City to Manchester United. The fee beat out Liverpool’s signing of defender Virgil Van Dijk in January 2018 for £75 million and levels Ronaldo-to-Real Madrid’s fee of £80 million ahead of the 2009/10 season.

The Belgian forward Romelu Lukaku signed for Manchester United from Everton in 2017 for a £75m transfer fee. It marked the second time Lukaku would play under Mourinho, who originally sold him to Everton when both player and coach were at Chelsea.

After scoring 82 times in four years for the Liverpool side, The Uruguayan striker transferred to Barcelona for a £75m transfer fee in 2013. Suarez has since netted 155 times with the Barcelona side, leading them to his first Champions League title.

Barcelona let Suarez go in the summer of 2020 after six years with the club, a decision they came to regret. Suarez led Atletico Madrid to the 2020/21 La Liga tile.