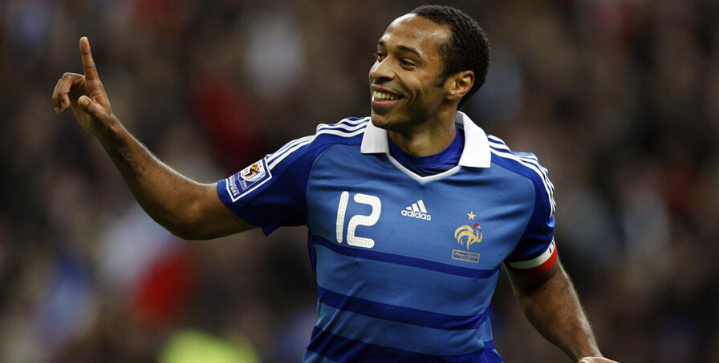 France seems to present fresh faces every World Cup with an extensive talent pool. At the same time, some of its veterans — Lloris, Benzema, Griezmann — are too indispensable to replace. Here’s a list of the eleven most capped players from Les Bleus.

With 142 games played, Lilian Thuram is the most capped French player to date. An industrious defender, he played an important role in helping France secure its first World Cup in 1998 where he earned the Bronze Ball. He also won the Euro in 2000 and a Confederations Cup, before going to play in 2006 World Cup finals and Euro 2004 and 2008, the latter as captain.

With 132 caps, the super reflexive goalkeeper Hugo Lloris featured for the French side that won the World Cup in 2018. Captain of the team since 2010, Lloris also led Les Bleus to a quarterfinals finish at Euro 2012 and the 2014 World Cup along with finishing runners-up at Euro 2016.

‘The King’ as Arsenal fans called him, Thierry Henry earned 123 caps over his 13-year international career, notching a team record 51 goals and winning both a World Cup in 1998 and the Euros in 2000. The combination of Henry’s pace, dribbling and finishing skills made him a defensive nightmare at both international and club level.

With 116 caps, the defensive midfielder Marcel Desailly ranks as one of the best French players ever. He played a critical role in France’s run to the 1998 World Cup, demonstrating his expertise for smart, pinpoint tackles and ball-winning capabilities. He captained the side after the retirement of Didier Deschamp and helped lead Les Bleus to the 2001 Confederations Cup.

One of the most underrated strikers in the game — whom “F1 quality” Benzema once called “go-kart” — Oliver Giroud is France’s second highest goalscorer of all-time with 48 strikes. The target man is also the winner of the 2018 World Cup, which seemed to have kickstarted a personal trophy haul in which he won the 2019 Europa League, 2021 Champions League, and the 2022 Serie A title.

A football legend, Zinedine Zidane led France to its first World Cup ever in 1998. Two years later, the majestic midfielder led France to its second Euro trophy where he was named the player of the tournament. Zizou fell short on penalty kicks in the World Cup 2006 final in which he famously got ejected for a head-butt to Italian defender Marco Materazzi. With 108 caps and countless club trophies as player and coach, Zidane is an obvious choice in France’s best 11 of all time.

A part of France’s World Cup 98 run when he was just 22 and a subsequent winner of the Euros in 2002, Patrick Vieira formed the complete footballer. He possessed incredible technique and athleticism combined with defensive prowess. While he captained the French side in Euro 2008, he nonetheless fell out injured and retired in 2010, altogether earning 107 caps and firing six goals.

The top scorer of UEFA Euro 2016, Antoine Griezmann, ranks 3rd on France’s all-time leading goalscorer list with 42. The Frenchman also finished France’s triumphant 2018 World Cup as the 2018 tournament’s second-highest goalscorer and was named the final’s Man of the Match.

Griezmann gives France the lead with a classy finish 👌 pic.twitter.com/h1AT1nc3Wi

Before he coached the French national team to a 2018 World Cup trophy, Didier Deschamps starred as a defensive midfielder for Les Bleus. For over a decade, Deschamps appeared 103 times and captained the side to France’s first World Cup victory in 1998 and the European Championship trophy in 2000.

The French Defender Laurent Blanc served as the cornerstone of France’s World Cup in 1998 as well as the UEFA European Championship in 2000. He earned 97 caps with Les Bleus over eleven years.

With 97 caps, left-back Bixente Lizarazu helped France win its first World Cup in 1998 and the subsequent European Championship in 2000. He also earned a score of domestic and cup medals at club sides Bayern Munich and Bordeaux.

Although cut from the French national team that won the World Cup 2018 for off-the-field issues, Karim Benzema is still one of France’s most capped and has recently returned to the national team with great fanfare. The probable 2022 Ballon d’Or winner for his heroics during the victorious 2021/22 Champions League season at Real Madrid will be looking to add to his trophy haul with a World Cup trophy in Qatar this winter.

With 92 appearances over seven years, Sylvain Wiltord scored 26 times for the French national team — none more significant than his last-second goal that tied up the game 1-1 against Italy in the Euro 2000 final. France won the tournament. Wiltord also won the Confederations Cup in 2001 and 2003.

The bald goalkeeper protected the goalposts for the World Cup winners France in 1998, as well as the Euro 2000. Although standing only 5 foot 11, he made up for his lack of height with insane acrobatics and the ability to lead from the back. Barthez also steered a victorious Marseille to the 1992/93 UEFA Champions League title.