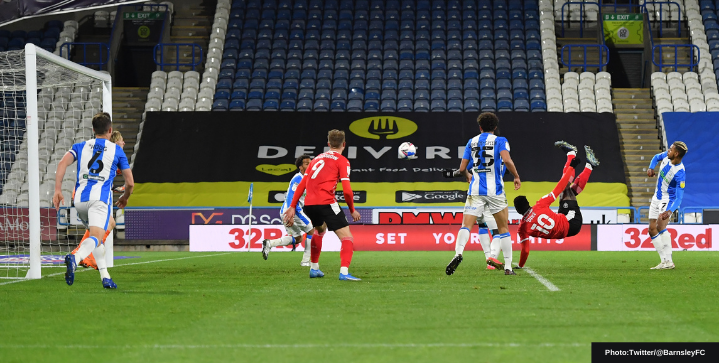 Daryl Dike is enjoying an unbelievable loan spell at Barnsley.

The 20-year-old American forward has bagged 9 goals in 16 matches, with the highest goals per shots on target in the Championship (.67).

The Tykes have won every game Dike has scored in, including last night’s 1-0 victory over Huddersfield. The big man scored a bicycle in the 65th minute.

Dyke’s goals have helped Barnsley move up six spots from when he joined the club at 12th in the table. Barnsley are now hunting for a promotion to the Premier League.

Start the day with another view of @DarylDike's bike from yesterday.

The 🇺🇸 striker now has 9 goals in 16 matches since joining @BarnsleyFC on loan.

The Oklahoma-born kid is a versatile forward and target man, who can hold it up, flick it on, play short, and take on defenders himself en route to providing a finishing touch. He’s quickly becoming one of the best players in the Championship and will no doubt be the USMNT No. 9 if he continues this startling form.

Orlando City SC drafted the former University of Virginia striker in the 2020 MLS SuperDraft. But after running riot overseas, it looks the on-loan Barnsley man may stick around somewhere in England rather than returning to the MLS?

In fact, he’s already been linked with a $10M move to one of the Premier League’s ‘big six.’ Everton, for one, have taken a keen interest in the American striker. The Toffees famously hosted America’s last super footballers, Landon Donovan and Tim Howard.

Do you see Dike succeeding in the Premier League? Let us know on Facebook.