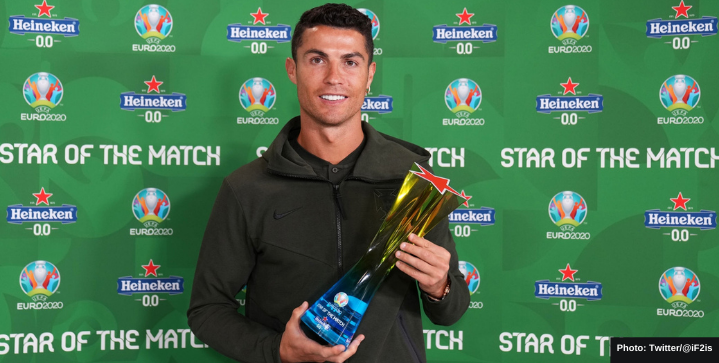 Cristiano Ronaldo is not one to shy away from his intense caloric discipline.

Last Monday, the Juventus star caused a stir when he moved two coke bottles during a pre-match press conference ahead of Portugal’s European Championship match against Hungary. Instead, he encouraged viewers to drink more “agua” or water.

The 36-year-old’s one small snub wiped a reported $4B in market shares off Coca-Cola, one of the tournament’s official sponsors. Ronaldo once advertised for the beverage company when he was only 22 years old.

But the player, who is the most followed person on Instagram, is always trying to lead by example –especially when it comes to health.

Coke released a statement as a result of Ronaldo’s actions, saying “everyone is entitled to their drink preferences.”

Ronaldo’s coca-cola controversy has nonetheless been one of the talking points of the tournament.

“Cristiano Ronaldo is a special player who can do more than just move coke bottles,” said Joachim Low ahead of Germany’s fixture against Portugal last Saturday.

France midfielder Paul Pogba followed suit, removing a Heineken bottle from one of his media events.

Meanwhile, Russia’s manager was too busy enjoying his free coke.

And then the memes from Ronaldo’s coke controversy started to emerge.