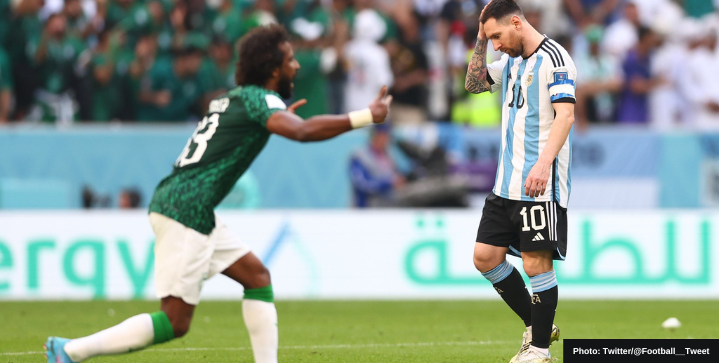 Given the odds of pairing powerhouses against mediocre countries, the World Cups are always full of surprises. These are our top World Cup upsets of all time.

It was supposed to be Messi and Argentina’s moment to shine. In fact, things started brightly with the magician scoring the first game’s goal. But it was all downhill from there after Argentina had countless goals called off by VAR, and the Saudi Arabia side turned on the heroics.

“Everything can happen in football,” Saudi Arabia head coach Herve Renard reminded everyone after the historic victory. Saudi Arabia sits atop Group C.

Expect the unexpected — that seems to be the theme of World Cup 2022. Japan followed Saudi Arabia in defeating a football powerhouse in Germany. The Japanese came from behind to defeat the four-time World Champions in their opening match in Qatar with a counter-attacking masterclass, with two goals from substitutes. The Samurai Blue came to play, indeed!

Germany has lost back-to-back opening World Cup fixtures for the first time in their history and this time, they can’t blame Mesut Ozil.

What should’ve been a home-field advantage for Brazil at the Estádio Mineirão in Belo Horizonte, Brazil, turned into a 7-1 nightmare of a route by eventual World Cup victors, Germany. Sure, two key players on the Brazilian squad were out — Neymar due to injury and Thiago Silva due to an excess of yellow cards. But Brazil always has a deep roster and some of the best players in the world on the bench. Yet, 2nd ranked Germany squashed their 3rd-ranked Brazil opponents, scoring four humiliating goals in six minutes. The game turned out to be a national embarrassment for the hosts, especially for a game that promised to be intensely competitive.

It wasn’t even expected to be close. The smallest nation in the World Cup ever, Iceland, was pitted against a football powerhouse in Argentina led by the one and only Lionel Messi. Some of the Iceland players even had day jobs. While Argentina advanced out of the group and Iceland got eliminated, it was Iceland’s first trip to the World Cup.

The German hosts were expected to coast to a victory over an Italian side who had a history of losing in penalty kicks in key stages, most notably the semifinal in 1990 and the 1994 final. But the Italians, led by goalie Gianluigi Buffon and Alessandro Del Piero, stepped up and sealed the win.

Coming off their victory in the 1990 World Cup, the Germans were expected to coast through the quarterfinals on the way to first-ever consecutive World Cup titles. But Bulgaria had another plan, especially given the confidence after trouncing Argentina in the first round 2-0. While Germany took the lead off a Lothar Matthau before halftime, Bulgaria pulled back two strikes in 2 minutes to leave the Germans in the dust.

Coming off a remarkable World Cup victory in World Cup 1998, France led by talisman Zinedine Zidane were supposed to advance deep into the 2002 World Cup. But even after a couple of shots from Henry and Trezeguet hit the posts, it wasn’t meant to be. Senegal beat Les Bleus 1-0 and took the 3 points before losing out to Sweden in the Round of 16.

The Swiss were huge underdogs in their match against a Spanish side led by Iniesta and Xavi, given a mere 10.3% chance of winning. Despite Spain’s 22 to 6 shots on goal, Switzerland found a way to win. But it was just the wake-up Spain needed as they went on to win the 2010 World Cup.

Pele had even predicted the Colombia side to make the semi-finals in World Cup 1994. But with an own goal from Colombia’s Andrés Escobar and a 53rd-minute goal from Ernie Stewart, the US held on at the Rose Bowl. But even more shockingly, a Colombian drug lord murdered Andrés Escobar a couple of weeks after the defeat in cold blood.

World Cup and Confederations Cup winners Germany faced off against Mexico in their inaugural game of the tournament, only to lose one-nil to El Tri. Mexico eventually moved on from the group while Germany suffered a shocking first-round exit with another shocking loss to South Korea.

The Czech Republic was supposed to walk over Ghana in the first round of the World Cup, led by led by Juventus playmaker and Ballon d’Or winner Pavel Nedvěd. But the Ghana team played exceptionally, eking out a two-nil victory to advance to the next round.

In hindsight, the Croatian side in 1998 led by Davor Suker was the country’s first golden generation before the 2018 World Cup saw the team go all the way to the final. With a three-nil victory over Germany, the underdog 98 squad eventually lost in the semi-final to World Cup winners France.

The World Cup co-hosts South Korea were not even expected to move beyond the group stage but finagled a victory over Italy in the round of 16 with two goals in the last few minutes of the game.

Yes, it was their home turf at the Stade de France in Saint-Denis, but the defending champs Brazil led by Ronaldo, Rivaldo, and Cafu were surely the favorites of the tournament. Nonetheless, the French side enjoyed a beautiful 3-0 display and set the country into a euphoric daze in winning its first World Cup ever.