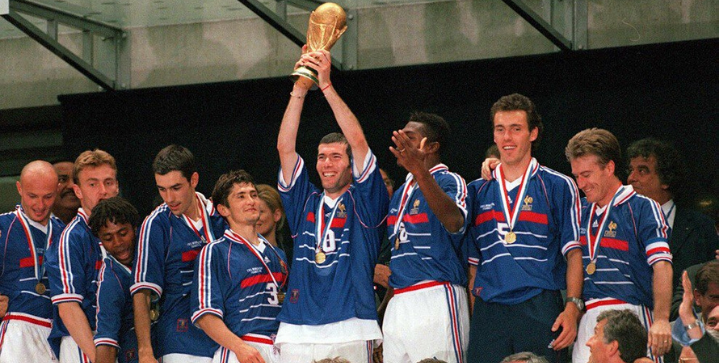 Which Brazil side was better: 1970, 1958, or 2002? In this post, we take on one of the most hotly debated issues in football and rank the eleven best World Cup teams.

The first televised World Cup, the Brazilian national team showed off its swagger in its trademark yellow kits. Led by the legend Pele and his supporting cast of Rivelino, Carlos Alberto, Jairzinho, and Tostao, Brazil roasted the Italians in front of 100,000 fans in Mexico’s iconic Azteca stadium.

Spain has produced some of the world’s finest footballers of the last decade, most evident in the team’s 2008 – 2012 golden era that saw the likes of Andries Iniesta, Xavi, and Xabi Alonso star on their respective domestic teams Barcelona and Real Madrid before teaming up to win the consecutive Euros in 2008 and 2012 plus the 2010 World Cup. With a mastery of the tiki-taka style of short geometric passing up the field, Spain made its domination both entertaining and easy.

Led by the likes of Zidane, Patrick Vieira, and Marcel Desailly, France defeated Brazilian legends Ronaldo, Rivaldo, Cafu, and Roberto Carlos three-nil in the finals of the 1998 World Cup in Paris. France supplanted its status as the world’s best by winning the Euros two years later.

Despite a slow start in World Cup 1982 with three draws in the group stages, Italy nonetheless picked up the pace in the knockout round led by its star striker Paolo Rossi. The Azzurri defeated the heavily favored Brazil in the second group round and West Germany in the final.

Powered by the likes of Miroslav Klose, Bastian Schweinsteiger, and Philip Lahm and up comers Mesut Ozil and Mario Gotze, Germany defeated Messi’s Argentina squad in the 2014 World Cup finals.

Led by legend Johan Cruyff, team Holland was supposed to win the World Cup in 1974 using their Total Football philosophy to dominate all opposition. However, despite the team’s talent, it met its maker in the finals against West Germany where it lost 2-1.

With Maradona at the acme of his powers in 1986, including the devious ‘Hand of God’ goal, Argentina strolled through the World Cup to win it in Mexico City 3-2 over West Germany. Argentina fielded a slew of talented players in addition to ‘El Diego’ such as Jorge Valdano and Oscar Ruggeri.

Having lost the 1998 World Cup, the Brazilian side was looking for redemption in 2002. The Brazilians, led by football stars Ronaldo, Rivaldo, and Ronaldinho, blew past their group and onto the finals where it defeated Germany 2-0.

The most recent victors of the World Cup, France, included a balanced squad of emerging and up and coming French talents that included the likes of teenage sensation Kylian Mbappe and the midfield maestro Paul Pogba. Twenty years after the country’s first World Cup, Les Bleu reclaimed the right to be called the world’s best.