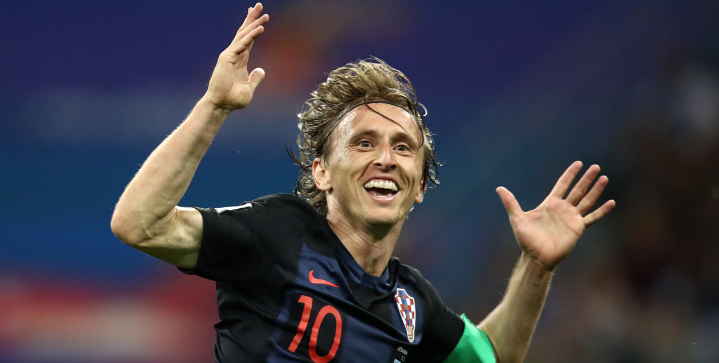 They say the average football player peaks between the ages 25 and 27. While we covered the young studs at the World Cup in our other list, this is a roundup of the veterans that are still performing at their best in the World Cup.

With infectious passion and lethal skill, Ronaldo is one of the greatest footballers ever to play the game. He’s also the most decorated, with 26 trophies including five Champions League titles and five Ballon d’Or awards. On the international stage, he led his team as captain to Portugal’s first-ever major silverware in UEFA Euro 2016. He also leads Portugal with 154 caps and 85 goals. Only the World Cup eludes the 34-year-old.

The 5-time Ballon d’Or winner has played 128 games for La Albiceleste and scored 65 times, a team record. After helping his side win the gold medal in the 2008 Beijing Olympics, Messi’s international career has experienced a mix of ups and downs. The 31-year-old has led Argentina to a runner-up in World Cup 2014 and runner-up in Copa América three times: 2007, 2015, 2016. After losing the Copa América in 2016, he briefly retired and then returned to play in the 2018 World Cup.

The hard-working and physical attacker Luis Suarez has earned 105 caps with the Uruguay side. The 32-year old’s most significant international honors include winning the 2011 Copa América as Player of the tournament. However, FIFA famously banned Suarez from nine international matches after he bit Italian defender Giorgio Chiellini on the shoulder in the 2014 World Cup.

With 92 caps and 59 goals for the Brazilian side, 27-year old Neymar Neymar has won the Confederations Cup and Brazil’s first football gold medal at the 2016 Summer Olympics. However, the World Cup still eludes him. The flashy forward who’s won the treble twice with Barcelona will be looking to redeem himself in the Qatar 2022.

At 30-years old, Brazilian left back Marcelo continues to impress spectators with his exquisite first touch. He’s played in two World Cups and won a 2013 Confederations Cup, notching a pair of silver and bronze Olympics medals on the way. He’ll be looking to add to his collection of club and international trophies when he plays his last World Cup in 2022.

Often overlooked for his selfless posture of play, the 27-year-old N’golo Kanté is typically the most industrious player on the field. With 34 caps for Les Bleus, he’s already won the World Cup and a runner-up at the 2016 European Championship. He ’s also obtained back-to-back Premier League titles in his first two seasons in the Premier League, the first with the improbable Leicester City and the second with Chelsea.

The 28-year-old Spanish goalkeeper has been one of the best goalkeepers in the world since he joined the Red Devils in 2011, producing a highlight reel of stunning saves and exceptional shot-blocks. While he’s only made 34 appearances for the Spanish national team and had a shocking 2018 World Cup in which he allowed seven goals on six on-target shots, he’ll be looking to raise his future international matches to the same consistent performances he shows at club-level.

The 27-year old Frenchman has been instrumental in Atletico Madrid’s success the last three seasons, scoring 114 goals in 217 appearances for Atlético. Winner of the 2018 Europa League, he’s also been named the best La Liga player in 2016, a year which also saw him nominated for the Ballon d’Or award. The World Cup winner inked another deal with the club for €20 million a year in June 2018 in preparation for another stellar season.

The 28-year-old Belgian is the ultimate midfielder. Nicknamed the “Belgian Messi,” Eden Hazard speed and ball control are second to none. A part of the Belgium squad since 2008, he’s made nearly 100 appearances and scored 27 goals. He’s also a two-time Premiership League champion Hazard has also won two domestic cups and the Europa League in 2013.

With 158 caps and 14 goals, 32-year-old Sergio Ramos has excelled for the national side ever since his senior debut in 2005. Building on the confidence from Euro 2008, the dynamic right back helped the team earn five clean sheets in its run-up to winning the 2010 World Cup. The engine and workhorse of the Spain defense, Ramos played every minute Euro 2012 as he did in the prior World Cup, earning the team yet another taste of glory.

Winner of the Champions League four times in five years and runner-up in the 2018 World Cup, 34-year-old Luka Modric is on a tear. The classy midfielder won FIFA’s “Best Player” award and UEFA Men’s Player of the Year Award in 2018 and will appear on the shortlist for this year’s Ballon d’Or. A six-time Croatian Footballer of the Year, the 33-year old captain now has 115 caps with the national side.