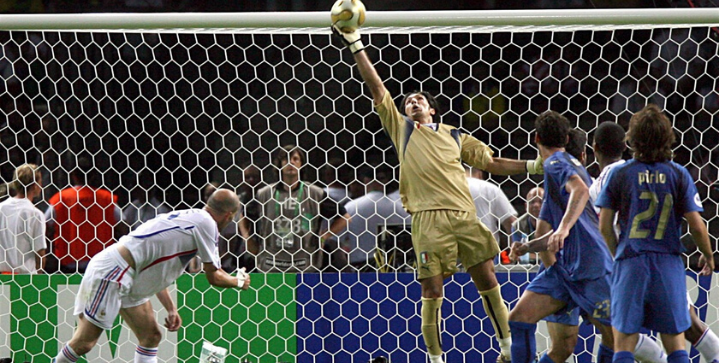 From the fingertip save or the insane acrobatic deflection off the boot, the man between the sticks is indispensable to team success. Here are some of the best saves in World Cup history.

In the 2006 World Cup final, Italian goalie Gianluigi Buffon made a fantastic right hand save on a zinger from a Zidane header. The goals would’ve sealed the victory for France; instead, it built up Zidane’s frustration and led to the subsequent headbutt. Italy won the World Cup trophy on penalty kicks.

Considered one of the best saves of all-time, Gordon Banks tipped a bouncing Pele header up and over the bar just as it was about to enter the goal. Brazil won the match 1-0.

In a save that haunts Arjen Robben’s chances at a World Cup trophy to this day, Iker Casillas made a kick save in a one on one chance against the Dutch striker. Spain won the World Cup with an Iniesta goal in extra time.

From the man who brought terror on the pitch, Oliver Kahn made a bunch of spectacular saves in a 1-0 over the USA in the World Cup quarterfinals. But the most incredible block came off a well-placed Landon Donovan shot that deflected off the fingers of an overstretched Kahn.

With a match-winning save on Wesley Sneijder on penalty kicks, Sergio Romero advanced Argentina to the World Cup finals for the first time since 1990.

In a group stage game between Honduras and Chile in World Cup 2010, Noel Valladares made a diving save off a wide-open Waldo Ponce header just outside the goal line in the 65th minute. Unfortunately, it was not enough as Chile moved on 1-0.

In what was a world record for saves in a World Cup game, Tim Howard blocked 16 shots against a wave of Belgium attacks. One of the most remarkable saves came off Howard’s foot as he used his entire body to prevent a goal from Eden Hazard in the 75th minute to keep the score level at 0-0. He’d make another amazing save on Hazard in the 78th minute. Belgium won the match 2-1.

Known as the Italian Wall, goalkeeper Dino Zoff made one of the most spectacular saves off a rocket of a header in the 82nd minute in the 1982 World Cup. Italy held on to the 3-2 lead, advancing to the semifinals and eventually becoming World Cup champions.

In a group stage match between Mexico and Brazil in the 2014 World Cup, Guillermo Ochoa made an excellent diving save to deny a Neymar header. The game ended 0-0 with Mexico advancing to the Round of 16.

Gianluigi Buffon appears twice on this list for his breathtaking performance in the 2006 World Cup. In a semifinal match against Germany, he reacted quickly to deflect a Lukas Podolski rocket shot. Buffon finished the tournament allowing only two goals on the way to the World Cup trophy.

In a Group B match between Chile and Australia in the 2014 World Cup, Claudio Bravo employed his quick instincts to reject a powerful shot from Australia’s Mark Bresciano.

The 11 best players from top-flight English Football, the 1990s