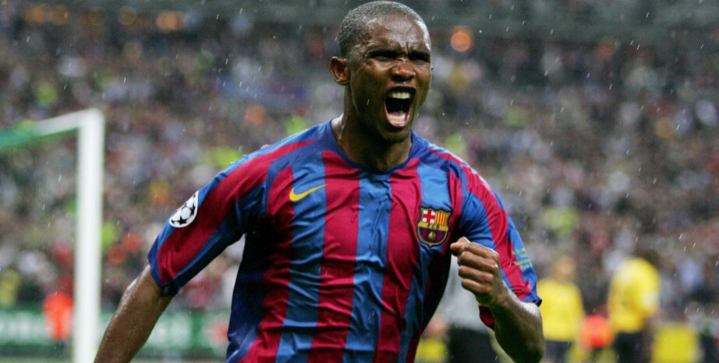 It comes as no surprise that one of the best football leagues in the world also has also featured some of the world’s best strikers. From Cristiano Ronaldo to Lionel Messi, these are the best strikers to ever play in La Liga.

Considered one of the greatest Spanish players for all time for his ball control and knack for goal, Raul broke into the Real Madrid first team as a 17-year-old. The rest is history. He spent 16 years with Los Blancos, scoring 323 goals which rank him fifth on the all-time scoring La Liga list behind Ronaldo and Messi. The 6-time La Liga Champion also starred in 3 Champions League wins and four Spanish Super Cups.

Rejected by Real Madrid early in his career, the Cameroonian striker went on to have an illustrious career with Barcelona and Inter Milan in the first decade of the 21st century. At Barcelona, he scored a magnificent 130 goals in 199 games and won the Treble in the 2008/09 season winning Champions League, La Liga, and Copa del Rey.

For someone nicknamed “El Guaje” or “the little kid,” the goals were big and plentiful. He scored 129 goals in his 225 appearances for Valencia from 2005 – 2010, topping with another 48 in 118 games at Barcelona, where he won Champions League and La Liga in 2011. David Villa remains Spain’s leading scorer, with 59 strikes in 97 national appearances. He also served as the catalyst that drove Spain to its first World Cup victory in 2010.

Part of the Galácticos era which saw teammates Zidane, Beckham, and Roberto Carlos join the squad, Ronaldo played 5 years with Los Blancos where he scored over 100 goals. Following his second Ballon d’Or in 2002, he won La Liga with Real where he also finished as top scorer in the league. Ronaldo also spent only one season in the mid-1990s with the Barcelona side but it was prolific. The Brazilian legend bagged 47 goals in 51 matches. He helped Barcelona win the Copa del Rey, UEFA Cup Winner’s Cup, and the Spanish Super Cup.

Often considered one of the best to ever play the game, the gifted Brazilian dribbler known quite simply as Ronaldinho scored 70 goals for the Catalan side over five seasons. He remains only player other than Maradona to have received a round of applause from Real Madrid at the Santiago Bernabéu. The smiling superstar won both a Ballon d’Or and FIFA World Player of the year after winning Champions League and second La Liga title 2005.

A divisive player who was notably cut from the French national team that won the World Cup 2018 for off the field issues, Karim Benzema has been an absolute gem for Los Blancos. In his nine years and 422 caps with the club, the crafty and powerful forward has scored 197 goals. He’s also been part of the squads that have won four consecutive Champions League, 2 La Liga, and 2 Copa Del Rey.

In a seven-year career at the Bernabeu from 1985 to 1992, the Mexican striker won five consecutive league titles, a Spanish Cup, and the UEFA Cup. A prolific and spectacular goal-scorer, he fired 164 goals in the domestic league, 38 of which came during the 1989-90 season.