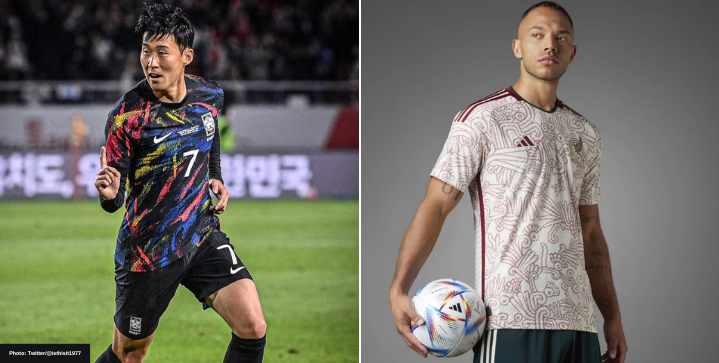 Simple, stylish, or innovative? When evaluating the custom kits for each of the 32 teams at this year’s World Cup, many variables are at play.

With less than one week left until the start of the 2022 FIFA World Cup in Qatar, let’s look at which teams have the best kit.

One thing is sure: We all know the England and USA kits are a bust.

Mexico’s away kit celebrates the country’s indigenous roots. The off-white kit, made by Adidas, features a ubiquitous” Quetzalcoatl” or the “Feathered Serpent” pattern. The red accented rest, accompanied by the tinge of green on the collar and green shorts, make this shirt a must-buy. Nigeria’s 2018 standout kit finally has some competition.

Japan’s Adidas blue home kit is a thing of beauty. The geometric origami-inspired patterned shirt represents the steady pace of the sacred crane in flight. Slick, especially in contrast with the white shorts and blue socks.

Kappa has made some glorious kits this year, most notably Venezia’s gold third kit, but Tunisia’s third kit for the Qatar World Cup is something to dig too. Inspired by the country’s hallmark olive oil, the green colorway gets tinted with beautiful gold accents on the crest and logo. The graphic on the shirt represents the shield of the Carthaginian general Hannibal.

Could this be Argentina’s year? The supercomputers have predicted that Messi’s fifth time could be the charm.

The current World Champions, France, always do their kits just right. Nike has maintained a clean and simple look this time, pairing a darker blue colorway against gold accented numbers, badge, and logo. The one-button collar and subtle leafy pattern on the neckline are also nothing to miss.

Ecuador’s World Cup away kit represents bold simplicity as its finest. The navy shirt, made by Marathon, combines a unique geometric pattern on the front in contrast to the white trim on the crew-neck collar and sleeves. The Ecuadorian flag on the sleeves also provides a special touch. Ecuador’s reinvented crest and brand logo also appear on the chest, flashing silver.

Who isn’t excited to see Tottenham ace Son Heung-min dazzle in South Korea’s new kit? The black away shirt, made by Nike, looks like a multi-colored fireworks display but pairs well with the massive white tiger crest, which features prominently on the chest. Big fan of this one.