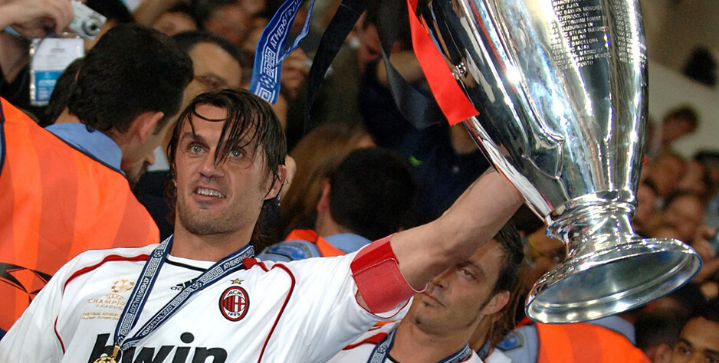 Full-backs come in all shapes and sizes — there are those who can score goals, run the flank, and others who focus on the dirty work and pass it swiftly out of the back. But the best ones in the world really step it up in pivotal moments, such as in the Champions League.

Let us introduce the top defenders in Champions League history since its rebranding in 1992.

One of the most consistent defenders of all-time, Paulo Maldini finished third for the Ballon D’Or twice, once in 1994 and a second time nine years later. The one-club Italian captained AC Milan to 5 Champions League trophies and seven league titles in 14 historic years with AC Milan. He also helped lead Italy to a World Cup victory in 2006.

An inspiring leader with a diligent work ethic, right back Carles Puyol captained the Barca side for a decade where he won six La Liga titles and 3 Champions League trophies. On a team of superstars, he may not have been the flashiest player, but he was the most committed. His winning attitude was contagious — he also helped steer Spain to the World Cup in 2010.

Recognized for his technical skills and pace, the Brazilian right-back Dani Alves won 24 trophies in his eight years at Nou Camp, including the Treble in his first season. His trophy collection includes a total of 3 Champions League titles, 6 League titles, 4 Spanish Cups, 5 Spanish Super Cups, and 4 UEFA Supercups. He also played a critical role in getting Juventus into the Champions League during the 2016/17 season.

The right-back played 17 seasons for the Bavaria side, captaining the team to its first Treble in 2012 with the Champions League, German League title, and DFB Cup under his belt. Known as a talented and judicious fullback — Pep Guardiola called him “perhaps the most intelligent player I have ever trained in my career.”

Known as ‘Captain Fantastic,’ the defender John Terry spent over 19 years at Chelsea, amounting to 500 appearances with the club. Terry capped off a storied career with a Champions League victory in 2012. He also earned four FA Cups and three league cups. John Terry is still the only player to captain a team in the Premier League to five titles.

Considered one of the best ball-playing defenders, the dominant center-back Rio Ferdinand played 12 years at Manchester United where he won Champions League in the 2007/08 season. He also won the Premier League in his first year with the club in 2003, earning a total of six Premier League titles.

Signed in 2006, Nemanja Vidić spent eight years protecting the back for the Red Devils. Forceful and reliable, Vidić helped United win a bucket of trophies including a Champions League in 2008 and five Premier League trophies. During the 2008/09 season, Vidić helped Manchester United record 14 clean sheets in a row as he won his first of two Premier League Player of the Season awards.

Ramos succeeded Iker Casillas as Real Madrid captain in 2015, helping guide Los Blancos to four of the five last Champions League victories. Love him or hate him for the occasional dubious foul, he has been consistent at the top level for 14 years and scored some crucial goals along the way. He also played a critical role in helping Spain win the World Cup in 2010.

Known for his exquisite first touch, the Brazilian left-back Marcelo has spent the past 11 seasons at the Bernabeu. A four-time Champions League winner and La Liga champion, he’s also won two Copa Del Rey as well as a World Cup.

Not known for his pace, Gerard Piqué has nonetheless morphed into one of Barcelona’s most versatile defenders given his dependability in the air and sharp passing abilities. In his 456 caps in his nine years with the squad, he’s won the Treble of Champions League, Spanish Cup, and La Liga twice. He also played a critical role in helping Spain win the World Cup.