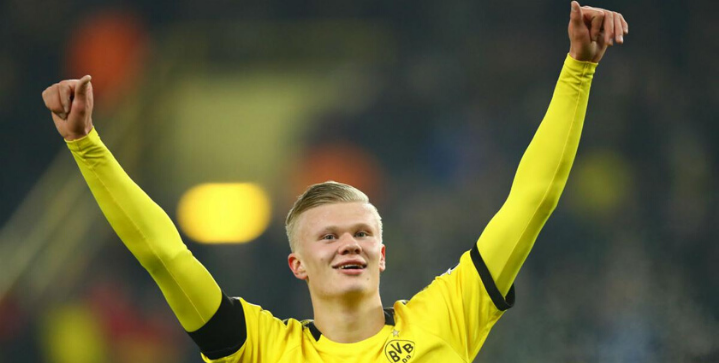 There’s nothing more exciting than watching a young footballer fulfilling their potential in Europe’s biggest leagues, on the world’s biggest stage.

Here’s a list of our top ten young footballers making ground in the game today.

The youngest player on this list, left-winger Ansu Fati made his Barca debut at the age of 16.

The youngest Barcelona player to appear in a La Liga match in 78 years in the team’s 5-2 win over Real Betis last August, Fati also scored and assisted in his first start for Barcelona the following month at Camp Nou.

A native of Guinea Bissau, the wonder kid has nonetheless nationalized for Spain, adding even more talent to one of the world’s best footballing nations.

Is he stronger with his left foot or right foot? No one, not even Mason Greenwood, knows the answer to that question.

The 18-year-old starlet has enjoyed a breakthrough season with the Red Devils, scoring 12 goals and providing four assists. The golden boy signed a new contract with the club last October, keeping him at Old Trafford until 2023.

18-year-old Bukayo Saka has become one of the few bright spots for Arsenal this season. The English winger/left-back has seen his stock rise since becoming the first Arsenal teen in 13 years with 10+ assists.

So vital to the future of the club, boss Mikel Arteta is keen to finalize a new contract with Saka at £35,000-a-week to ward off interest from Manchester United.

The highly-rated Brazilian prospect signed to Arsenal for £6m at the beginning of the 2019/20 season and has notched ten goals and four assists in 26 appearances. He’s the first teenager to score ten goals for Arsenal since Nicolas Anelka in 1998-99.

Real Madrid star Rodrygo has emerged as the next big thing in Brazilian football. The 19-year-old talent signed to Real Madrid for $49.3 million at the beginning of the 2019/20 season. He’s earned nine goals and provided two assists in just 18 appearances across all competitions.

What else is there to say about goal-machine Norwegian teenager Erling Haaland?

He scored 12 goals in his first eight games for Borussia Dortmund since signing during the winter transfer window, giving him 40 goals in 30 goals for the season. An absolute footballing beast.

Touted by his manager Pep Guardiola as one of the best youngest talents he’s ever seen — and Pep witnessed Messi’s emergence first-hand — Foden is lined up for a bright future.

A successor to the soon to be departing David Silva, Foden even won plaudits from the GOAT himself: Messi called him a “huge talent.”

After doing his thing in the MLS, Canadian winger and left-back Alphonso Davies took his talents to Bayern Munich where he’s already become a star.

In just two seasons, the 19-year-old has become one of the best LB’s in Europe, leading the top 5 leagues in 49 tackles amongst teenagers and providing 28 key passes among all players this season.

With deft dribbling and wise passing, the kid is more than just speed.

English sensation Jadon Sancho has been on a tear in the Bundesliga this season, recording 14 goals and 16 assists in just 24 games. His talent and prolific output make him a key transfer target for the likes of Manchester United, Liverpool, and Bavarian giants Bayern Munich.

Did Atletico sign the next Cristiano Ronaldo? That was the question asked of Portugeuest sensation Joao Felix when Atletico Madrid signed the wonderkid for €126m last summer.

The then 19-year-old was coming off a season for Benfica where he became the youngest player ever to score a hat trick in the Europa League along with scoring 15 goals and earning seven assists in 21 starts for Benfica.

While suffering a few injuries and setbacks in his debut season for Atletico, he’s still managed four goals, and one assist in 20 La Liga matches.