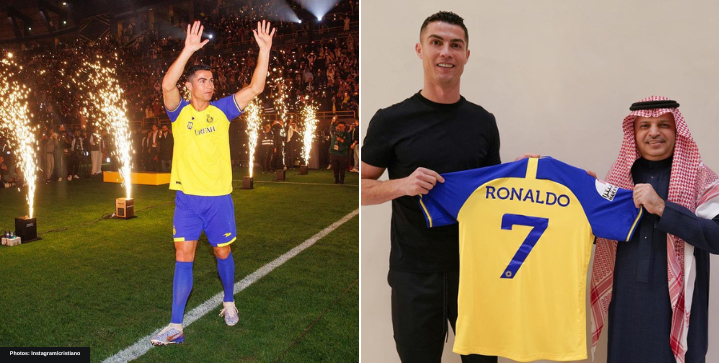 It happens even to the best of us. Cristiano Ronaldo mistakenly called Saudi Arabia “South Africa” in his first press conference since joining Al Nassr.

The Portuguese legend made a $210 million mega move to the Riyadh club earlier this week. The club has gained over 8.6 million followers since then, a massive 1620% increase.

A slip of the tongue?

“It’s not the end of my career to come to South Africa,” he told the press during his first formal presentation for his new club.

The irony behind him wasn’t missed, as the background signage clearly states, “Saudi welcome to Arabia.”

Freudian slip, perhaps? Either way, no one in the room corrected the striker’s gaffe.

“In Europe, my work is done. I’ve won everything. I’ve played in the most important clubs in Europe. And now for me is a new challenge,” the five-time Champions League winner and Ballon d’Or winner added.

The 37-year-old split with Manchester United on mutual consent in November after the player provided an explosive interview with Piers Morgan.

When will Ronaldo debut for Al Nassr?

Ronaldo intended to debut for Al-Nassar against Al Ta’ee on Thursday night. But the player is still banned.

The player is serving a two-game FA suspension for smacking a 14-year-old Everton fan’s phone out of their hands last season. He also paid a $60k fine for the outburst.

Nonetheless, 25,000 Al Nassr fans got a first taste of Cristiano when they filled Mrsool Park stadium on Monday to greet their latest signing.

Ronaldo’s $200 million annual salary makes him the highest-paid footballer in the world.