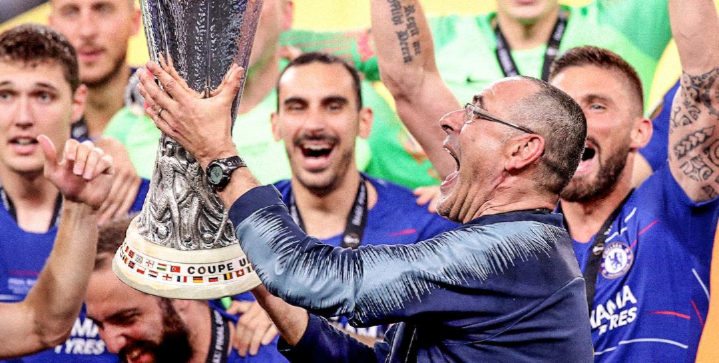 After his inaugural season in the Premier League where he helped Chelsea finish 3rd and win the Europa League, Maurizio Sarri may be on his way out of Stamford Bridge.

Heavily criticized throughout the season for playing a pacy possession-based style game of “Sarriball,” Chelsea fans may come to rue the loss of their latest Italian coach.

But Sarri may face his biggest criticism yet if he decides to take on the head coaching role of Juventus. Keep in mind that Napoli fans burnt their Higuain kits after he ditched them for Juve in 2016.

The 60-year-old Sarri helped his hometown club Napoli push its Turin arch rivals in the North to the brink of Serie A titles in each of his three seasons. Finishing four points behind Juve in the 2017/18 season was Sarri’s final undoing.

Coaching the likes of Ronaldo, Dybala, and Aaron Ramsey won’t sit well with the Naples faithful. Even Chelsea midfielder Jorginho has warned Sarri about an impending move to Turin.

“He did a good job for Chelsea,” the Brazilian midfielder said.

“There was some criticism, but ultimately we finished third, won a cup and lost another in a final.

“I think it was a great season, and I’d hate to see him go. The Napoli fans still have him in their hearts, it’s normal that they can get angry.

“They’re passionate, they can give you everything. They could treat it as a betrayal, they’re like that. We’ll see what happens.”

Should Sarri stay in London, he faces the challenge of leading the Blues without superstar Eden Hazard who’s on his way to Real Madrid.

Hazard finished the 2018/19 season as the only Premier League player to accumulate double figures in goals and assists.

Keep on your eyes right here to see how it all unfolds.