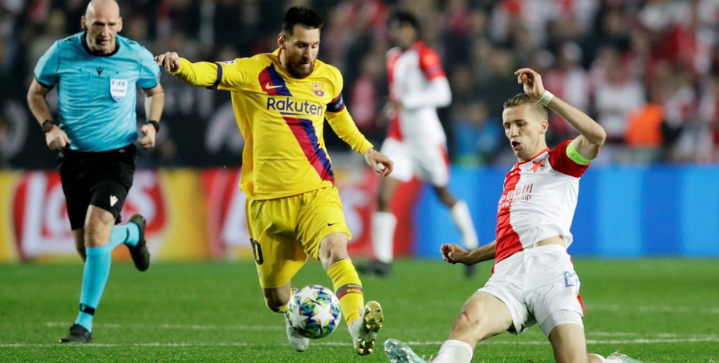 Barcelona defeated Slavia Prague 2-1 at Sinobo Stadium to put them atop Group F with 7 points. The Blaugrana move up three points clear of Inter and Borussia Dortmund in the Group of Death.

Here are 5 things we took away from Valverde’s side in Matchday 3.

1. Messi is recovering his GOAT form

Barcelona talisman Lionel Messi appears to be finding his groove after a late start to the new season — he suffered a foot injury earlier in the summer.

He scored in just the third minute tonight against Prague. With the strike, Messi became the first player to score in 15 consecutive Champions League seasons in the Champions League era. He also joined Raul and Cristiano Ronaldo in having scored against a record 33 different opponents in the UCL.

But it wasn’t always vintage Messi — he missed a sitter in the second half that would’ve put the game away. However, Messi created multiple scoring chances for the team, including a lead pass that Luis Suarez mishit wide and a deft free-kick to the Uruguayan who deflected the ball off Ajax defender Peter Olayinka for an own goal.

2. Ter Stegen is the Messi of goalkeepers

Go ahead and ignore the hyperbole. But do keep in mind that 27-year-old German goalie Marc-André ter Stegen played another stellar match between the sticks. It’s no wonder he’s battling Manuel Neuer as Germany’s no. 1 keeper.

Ter Stegen made 8 saves tonight, the second-highest in UCL this season. Overall, he’s saved 12 of the 13 shots on target he’s faced in Champions League this season (92.3%).

Ter Stegen and Messi are helping Valverde keep his job (more on that below).

Barcelona conceded a whopping 24 shots against Slavia Prague. “We did not play at the level we wanted but thankfully we got the three points,” said Ter Stegen.

“It is necessary to talk about some things. We have to do it between ourselves, I will not say it here, but there are things to improve – a few of them,” Barca’s goalie added.

Slavia pressed Barcelona, making life difficult for Barcelona’s midfield trio in Busquets, Arthur, and De Jong to get through. Add that to Barcelona’s aging backline led by Gerard Pique and Prague found and exploited plenty of holes.

In the 49th minute, nobody picked up the left back’s run into the area and Jan Borll toe-poked it the equalizer. Ter Stegen’s heroics are the only reason Barcelona held on to their lead.

4. Barcelona need to find additional goal scorers other than Messi and Own Goal

Barcelona had to rely on yet another own goal to take home all 3 points.

The own goal continues to be Barcelona’s most dependable Champions League goalscorer after Lionel Messi. Messi has more goals for Barcelona (19) in the past three Champions Leagues than the next three scorers combined (Own goal 7, Dembele 4, Suarez 4).

The match seemed to encompass all that is going wrong with Valverde’s side, a team with a wealth of gifted players but a lack of creativity and habit of nerves under pressure.

“I expected a game like this, they showed danger when we lost the ball,” said Valverde post-match.

Barca fans uproared when Valverde he took off the hard-working Griezmann tonight instead of Suarez, who missed chance after chance. Valverde also substituted Vidal for Busquets and Rakitic for Arthur when the team needed more possession and attack.

Valverde’s tactics seemed to suggest that he was ready to park the bus rather than press, which so famously failed at Anfield in last year’s semifinal defeat. But as long as Valverde earns the trust of Barcelona’s president Josep Maria Bartomeu, he’s going nowhere.