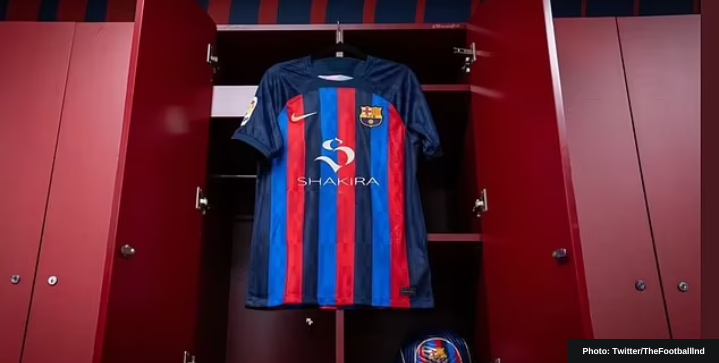 Divorced, benched, and now riddled with the possibility of his ex-wife appearing on Barcelona’s kits — Gerard Pique can’t catch a break. It is his fault, after all.

That’s right. FC Barcelona is working with Shakira to promote the Colombian singer’s new single “Monotonía,” whose lyrics evoke the pain she suffered from her breakup with Pique. The couple was married for twelve years before going separate ways last June.

The 45-year-old singer caught Pique having an affair with Clara Chia, an executive at Gerard Pique’s TV production company, Kosmos. Pique is now expecting a child (his third) with his girlfriend Clara.

According to Moisés Llorens, ESPN’s Barcelona correspondent, Shakira’s advertising is expected to appear on the Blaugrana’s shirt, just like Drake’s logo did during El Clasico. The collaboration is part of Barcelona’s four-year deal with Spotify, which also saw the stadium renamed Spotify Camp Nou.

Coldplay is also rumored to appear on the kit soon.

With “Monotonia,” Shakira tries to channel her emotions into art while rubbing in on her former husband, whom she once called “the best center back in the world” after Barcelona defeated Real Madrid in El Clasico last March.

“To complete you I broke into pieces. They warned me, but I did not listen. I realized that yours is false. It was the drop that overflowed the glass … I congratulate you that you act well,” state the lyrics, alluding to Pique’s betrayal.

“You in yours and me doing the same. We were accomplices of selfishness. We forget what one day we were and the best thing is that it was not your fault or mine, it was the fault of monotony,” the song continues.

Benched by former teammate and now head coach Xavi, the news of the Barcelona-Shakira collaboration is the nail in the coffin of Gerrard Pique’s year, as he can’t seem to escape the spotlight.

With her brand potentially on the next kit, Shakira aims to make the Spaniard’s life worse. Shakira’s songs already play over the stadium at Camp Nou, adding insult to injury. Talk about an awkward situation for all parties involved.