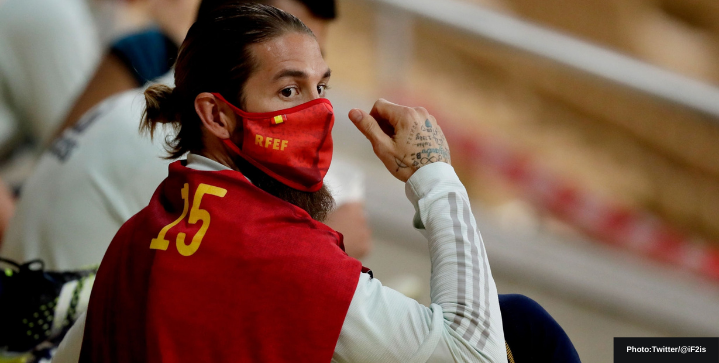 Spain have left Sergio Ramos off their Euro 2020 roster this summer.

The central defender and former international captain played an integral role in Spain’s victorious 2008 and 2012 European Championship titles. He leaves the team with 180 caps.

Barcelona’s Sergio Busquets takes over the captaincy for Spain in the immediate term.

“I clearly see that it’s a complicated decision. I recommended that he be selfish and that he regains his level to play in his club and in the national team.”

Enrique, quite remarkably, includes zero (yes, you read that right) players from the Real Madrid squad while adding to his 24-man squad players from Wolves and Brighton.

A season to forget for Ramos

Sergio Ramos endured a rough season at Madrid. He missed 35 games for Los Blancos due to nagging injuries including getting the Coronavirus.

“After a f*cked up few months and a strange season unlike anything I’ve experienced in my career comes the Euros,” admitted an emotionally hurt Ramos.

“I have fought and worked body and soul every day to be able to reach 100% with Real Madrid and Spain, but things don’t always go the way you want.”

Ramos and Nacho out, Laporte and Garcia in

The 26-year-old recently changed allegiances from France to Spain. Laporte is coming off a solid season for City who won the Premier League and face off against Chelsea in the Champions League final on Saturday.

Did Enrique make the right call in axing Ramos from the Spain national team? Let us know on Facebook.