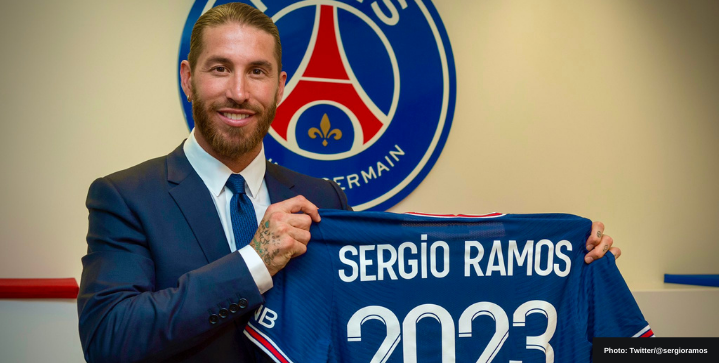 The wait is finally over.

Sergio Ramos expects to make his PSG and Champions League debut tonight in front of a sold-out crowd at the City of Manchester Stadium.

The 35-year-old Spaniard, who signed for the Parisians over the summer, has yet to appear after sustaining a stubborn calf injury from Real Madrid last season.

Ramos was part of PSG’s transfer window over the summer that included the superstar signings of Messi, Wijnaldum, Donnarumma, and Hakimi.

Former El Clasico rivals, Messi and Ramos may now field the pitch tonight in the red, white, and blue. The Argentine admits to strange vibes in the dressing room.

“Now nothing, but at first it was weird after so many years of being rivals, being the two captains of Barcelona and Madrid, after so many Clasicos played, so many fights we had on the pitch,” Messi told Marca.

“But all that is in the past and we have always respected each other a lot, no matter how much we have been rivals in those Clasicos. Having him as a teammate today is spectacular.”

Messi, who’s scored 7 goals on Pep Guardiola teams over 5 games, will look to continue his hot streak. And Ramos will look to bolster the defense, proving still he hasn’t lost a step.