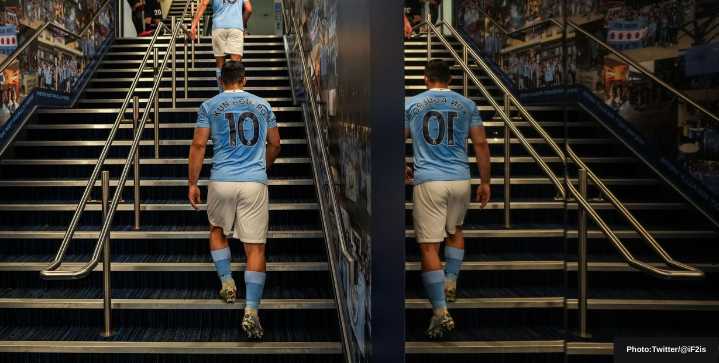 Sergio Aguero, the King of Manchester, retired prematurely to a heart problem in December 2021. He ended his 10-year Premier League career with the best minutes to goal ratio in league history and five EPL titles to boot.

But the Argentinian’s game lives on, with a statue to be unveiled next year at the Etihad to commemorate the legend.

Let’s take a look back at his most iconic goals of all time.

“Sergio Aguero is the best foreign player to play in the Premier League,” said Alan Shearer in 2018. Aguero scored 260 goals in 390 matches for Man City, none more vital than THAT goal in the last game of the 2012 season to help City win their first Premier League title.

Mario Balotelli laid the ball off for Aguero’s cannon of a finish in the 94th minute. Aguero called it one of the most memorable highlights of his playing career. The City crowd went ballistic.

On a European night in November 2014, City were desperate for a goal against Pep Guardiola’s Bayern Munich. 2-1 down, Aguero equalized in the 85th minute and then scored the game-winner in stoppage time to seal his hat-trick.

Aguero, who signed from Atletico Madrid for £35million in 2011, scored his first goal for the Cityzens after just eight minutes into his debut match. He also provided a dazzling back-pass assist and last-minute golazo from 30 yards out in the late minute of the match.

Did he really just do that? Down 2-1 to Liverpool in a league match against The Reds, Aguero chipped the ball from an impossible angle past Pepe Reina. Call it a hit and a hope, but it was pure skill and class from the Argentine.

Aguero came off the bench in the 71st minute to claim some redemption against the club’s cross-town rivals. United may have won the 2012/13 Premier League title, but Aguero was there to remind the Red Devils that City were a force to be reckoned with. Watch Aguero dribbled past five and slot home a 2-1 winner against Manchester United.

Man City were the predominant team in Manchester going into Aguero’s 8th season at the club. The big scorelines became a hallmark of Pep Guardiola’s side, none more evident than a five-goal to one thriller against Leicester City. The Argentine forward scored four of those goals, with the fifth a precise dinger off the top crossbar.

Aguero put five past Newcastle sporting a mohawk during the 2015/16 seasons. But his third and fourth goals were the most exquisite. After delicately chipping the keeper to seal the hat-trick, he takes the defender on one vs one to tee up a long-range strike outside the box.

A solo effort doesn’t get much better than this, especially at The Stadium of Light. Aguero nutmegs the defender and notches the ball past the keeper to score his first of a brace against Sunderland.

Another solo effort sees Aguero dribble past five players to knock in his third of the game against a browbeaten Watford side. That kiss off the post is just sublime.

Aguero still holds the record for the most Premier League hat tricks with twelve.

He could still hit them even in the latter stages of his career. Aguero teed up an absolute rocket in a Premier League match against Chelsea during the 2018/19 season. It was the first of his three goals, just another hat-trick in the bag for the legendary Aguero.

We will all miss Aguero’s magic, thank you, King.

Dortmund lead the race to sign Adeyemi after Barca shrug