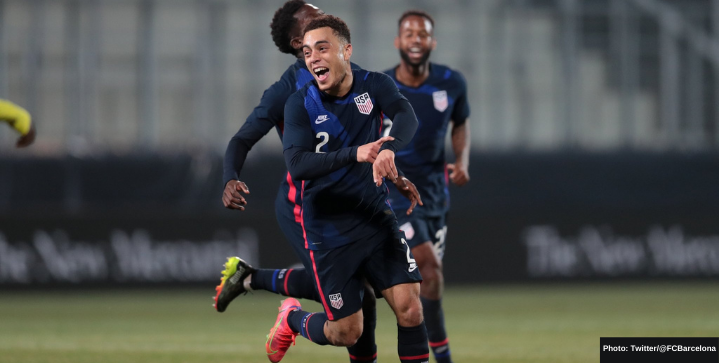 Last Sunday, he became the first American to score a brace in La Liga.

Four days later, he scores a stunning first-half goal against Jamaica in an international friendly.

Dest played 67 minutes for the Stars and Stripes, earning the goal, a 92% passing completion rate, 5/6 duels won, 2/3 dribbles completed, and one interception. After the game, he was awarded Man of the Match.

A golazo from Dest

The goal occurred in the 34th minute when Dest received the ball at the midway line before cutting through the Jamaica midfield to tee up his powerful right-footed curler 25 years inside the far post.

“He told me he was gonna score also,” Gregg Berhalter admitted at halftime.

20-year-old Dest celebrated the goal with Chelsea star Christian Pulisic — the two have only played together for the USMNT twice. They form part of a golden generation of youthful U.S. male talent including Weston McKennie, Tyler Adams, Gio Reyna, and Yunas Musah that could all feature in the 2022 World Cup.

Dest looks to earn his seventh cap for the USMNT this Sunday when the United States take on Northern Ireland.