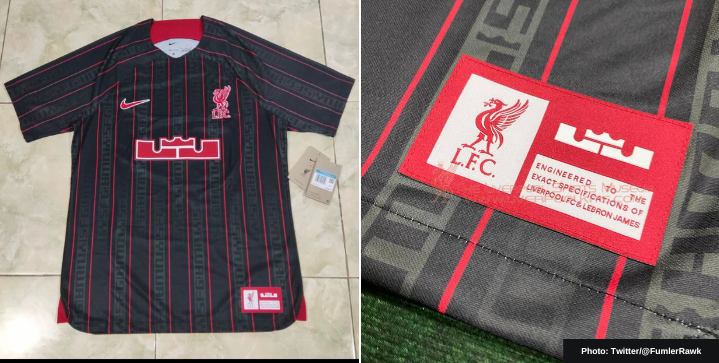 As we mentioned yesterday, Nike was set to release an exclusive Liverpool-Lebron kit this January.

Twenty-four hours later, the leaked images surfaced online. As you can see, it’s not exactly the high-brow kit we expected from the iconic brand and player. In fact, the pinstripes make the jersey eerily resembles a baseball jersey.

Is the Lebron-Liverpool-themed kit a rival to PSG’s Air Jordan?

The jersey is perhaps just the beginning of other pieces forthcoming from the Nike brand. As Liverpool chairman Tom Werner promised in 2021, there would be seven to eight Lebron-branded products intended to rival PSG’s Air Jordan.

But the overall aesthetic of this debut collaboration seems to fall flat.

The shirt is predominantly black with red stripes, with a King James’ crown logo taking center stage. The club’s emblem and Nike swoosh are in the usual spots at the chest. The initials for the Liverpool song YNWA “You’ll Never Walk Alone” face vertically within each of the stripes.

Liverpool announced a “multi-year deal” with Nike worth around $39.5 million per year in January 2020. The deal pledged to bring Nike’s biggest client Lebron James, who’s also an investor in LFC, closer together in collaboration to sell Lebron-Liverpool-themed merchandise.

We doubt the Reds will be wearing this one on the pitch. What are your thoughts on the first-ever kit between Nike, Liverpool, and Lebron?