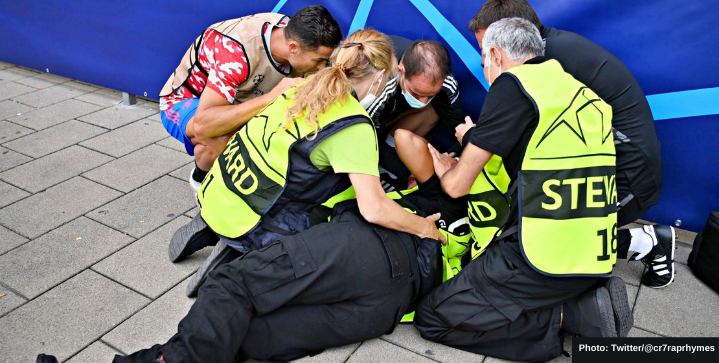 Cristiano Ronaldo knocked out a steward in training with his shot before the match between Man United and Young Boys.

The Portuguese star jumped over the barrier to check on the unsuspecting staffer as he received medical attention.

The regretful Ronaldo can be seen apologizing to the security guard for his wayward shot.

The good news for Ronaldo is that he was on target nearly half an hour later. The 36-year-old scored off a beautiful outside of the foot pass from teammate Bruno Fernandes in the 13th-minute.

The goal marked Ronaldo’s record of scoring in 17 straight Champions League campaigns. All this on his 177th Champions League appearance, tying Iker Casillas’s record for the most appearances in the tournament’s history. Ronaldo has scored three goals in just two games back in the United kit.

Unfortunately, the Red Devils could not hold on to the early lead. The Young Boys eventually capitalized on a 10-men United side, scoring an equalizer in the 66th minute. USMNT’s Jordan Pefok picked up an errant back pass from Jesse Lingard to score the game-winner in the 94th minute.