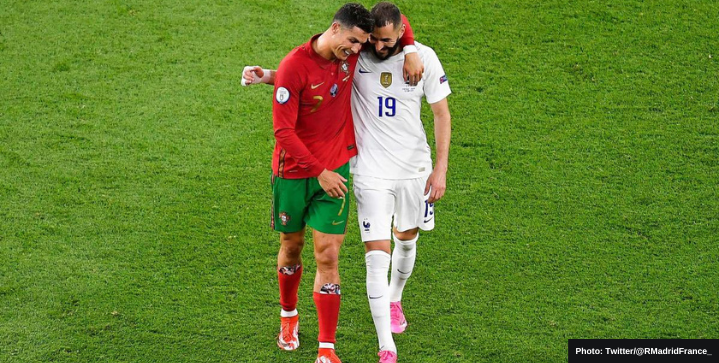 According to Le Parisien, Cristiano Ronaldo will attend the Ballon d’Or ceremony in France on Monday.

But this time, the five-time winner is not expected to win it despite scoring 18 goals in 31 matches at Manchester United last season.

Although nominated for the Ballon d’Or 2022 award, the Portuguese striker is going to the gala to see his friend and former teammate Karim Benzema pick up the award.

The two paired up at Real Madrid to win the Champions League trophy five times, collecting a total of 14 trophies and scoring together a whopping 600 goals.

Yet, Benzema has been the main man since Ronaldo jumped ship for Juventus in 2018, snatching more goals than Puskas, more assists than Zidane, and more trophies than Ronaldo in his 13-year career with Los Blancos.

Benzema to be crowned Ballon d’Or 2022

The 34-year-old Frenchman is the favorite to receive the Ballon d’Or on October 17 after a remarkable Champions League-winning season at Real Madrid.

Last year’s winner, Lionel Messi, who’s won the Ballon d’Or trophy a record seven times, is not on the shortlist of 30 players but admitted that Benzema is undoubtedly the 2022 winner.

“There are no doubts, it’s very clear that Benzema had a spectacular year and ended up victorious in the Champions League,” Messi told Argentine television last May.

“He was fundamental in all the matches from the round of 16 onwards. I think there is no doubt this year.”

Are you excited to see Benzema win the 2022 Ballon d’Or? Let us know on Twitter.