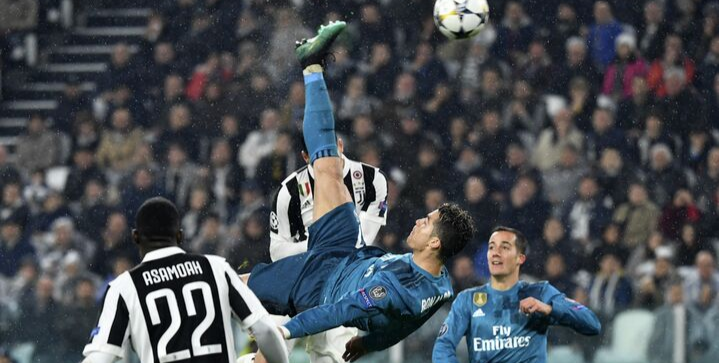 In an interview with Piers Morgan on ITV, the 34-year-old Ronaldo admitted that he rates sex with his girlfriend Georgina Rodriguez higher than his overhead stunner against Juventus in the 2017-18 Champions League quarter-finals.

“I tried to score this goal for many, many years. I had scored 700-odd goals but I hadn’t done this. I thought ‘finally I had scored a bicycle, the beautiful jumping,” Ronaldo told Morgan.

“The way I had done against Buffon, against Juventus, in the Champions League. It was a beautiful goal,” he added.

Morgan asked him if the golazo — often considered one of the best strikes of all-time — was better than sex, to which Ronaldo laughed and responded:

The couple has a daughter and also take care of three other children from mothers of Ronaldo’s past relationships.

It’s no surprise that Ronaldo selected his bicycle kick against his current team as one of his best goals ever.

Upon receiving a chipped pass back from Dani Carvajal, Ronaldo exploited his acrobatics to smash it beyond a frozen Gianluigi Buffon.

Highlights from Ronaldo’s discussion with Piers Morgan include his near-signing with Arsenal, an emotional break down when talking about his father, and of course, Ronaldo’s net worth of $450 million.